Naval Meteorology and Oceanography Command speaks to Exchange of Picayune 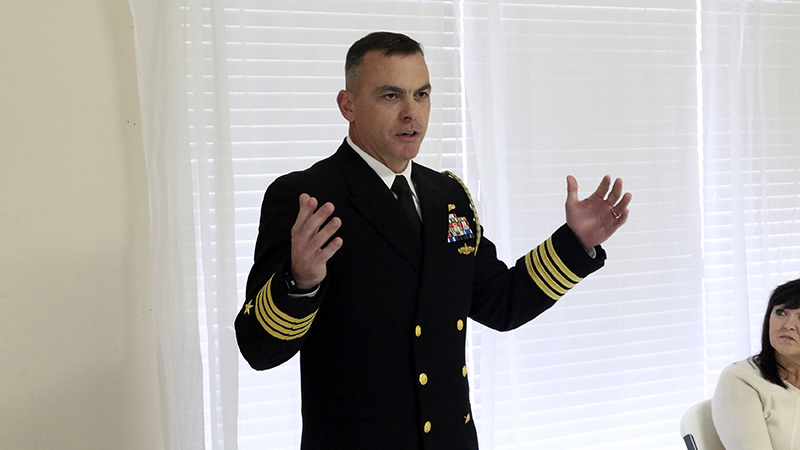 MULTI-TALENTED: Capt. Greg Emery, USN, speaks to members of the Exchange Club of Picayune about the Naval operations ongoing at Stennis Space Center and abroad. Photo by jeremy Pittari

Some of the work Naval Oceanography conducts out of Stennis Space Center and abroad assists in this nation’s defense in the form of counter terrorism, ensuring the safe passage of vessels that carry up to 90 percent of the goods across the ocean and protection of the lines under the ocean that transmit 90 percent of all global communication.

Emery said the Navy has seen the fight against terrorism move to the western Pacific, so the Navy has focused its efforts there.

Even though the Navy is not the global police, its presence helps keep pirate activity at bay, which is still prevalent in areas such as the western Pacific and Red Sea.

Advancements in weather prediction and recording are another goal of the Navy along with studying of the ocean to determine its depths and map its surface. Mapping the ocean gives submarines an edge and prevents underwater collisions with elevated portions of the Earth’s surface.

“We provide the home field advantage at away games,” Emery said.

Naval Oceanography, headquartered at Stennis Space Center in Hancock County, has the highest concentration of oceanographers.

Information gathered by those oceanographers helps predict weather patterns, ensures weapons systems operate properly and is used by commanders to determine where they will send ships.

The headquarters employs more than 1,000 civilians and enlisted personnel in Hancock County, he said. Emery said that personnel with the Navy began moving to Stennis to conduct work in 1975 and the command office was established at the rocket engine testing facility in 1978.