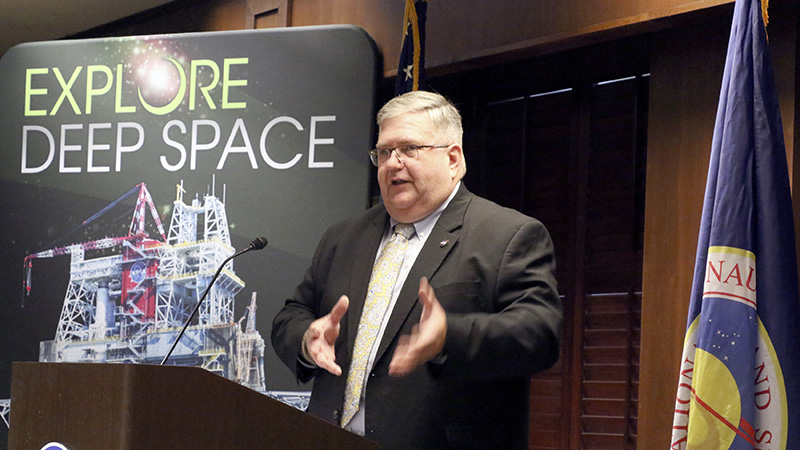 TO THE MOON: Stennis Space Center Deputy Director Randy Galloway addresses the media during Monday’s presentation of a plan to send humans to the moon and on to Mars. Photo by Jeremy Pittari

NASA outlined an ambitious plan to send humans to the moon and on to Mars during a broadcast at space centers across the country Monday.

Also outlined were plans to develop an aircraft capable of traveling at Mach 1.4, lobbying with the FAA to allow faster air travel by lessening restrictions on airspeeds and development of electric powered aircraft.

NASA Administrator Jim Bridenstine said that the agency is also planning to develop unmanned aircraft that can deliver packages within cities, and work with commercial entities to eventually make travel to low earth orbit accessible to more of the population.

In relation to the president’s request to send man to the moon and on to Mars, new space vehicles are under development. The Space Launch System will now be joined by a command service module called Gateway. Bridenstine said the module will orbit the moon and be capable of sending rovers, robots and even humans to the surface to collect even more data about the Earth’s natural satellite. Gateway will be a collaboration of space agencies across the world, including Canada who has agreed to assist with its development for the next 20 plus years. Europe, Japan and Russia will also collaborate on Gateway.

Bridenstine said Gateway will be able to propel itself to any orbit around the moon using a new technology called solar electric propulsion. The aim is to harvest the water ice on the moon’s poles for use as air in the space vehicles, water for the humans and fuel.

This entire program, called Moon to Mars, will be accomplished by using sustainable vehicles that can be reused, with one exception, Bridenstine said.

While SLS will not be reusable, the capsule it will carry, called Orion, will be.

The administrator also released information on a recent discovery on Mars. He said the rover Curiosity was able to confirm the presence of complex organic compounds on the red planet, which are the building blocks for life. Therefore, it’s possible that microbial life exists on that planet. Research is underway to see if the carbon dioxide on Mars can be converted to oxygen and returning a rock sample from Mars is included in this year’s budget request. Research will also need to be done to attempt to predict coronal mass ejections and other dangerous radiation that comes from the sun to protect the astronauts as they embark on missions to the moon and beyond.

After the national broadcast, Stennis Space Center Deputy Director Randy Galloway spoke to the media about the budget request and the testing that will take place in Hancock County in preparation for the Moon to Mars program.

Galloway said the budget request was for $21 billion; a six percent increase from the previous year. Stennis is requesting $183 million, an increase from last year’s budget of $132 million.

That request will cover a number of infrastructure improvements at the testing site, including drinking water line replacement and industrial water line upgrades to keep the testing stands cool.

Testing of two of the SLS engines will to take place at Stennis. The facility is already testing the RS25 engines, but by sometime in 2020 the core stage engines are expected to start testing on the recently repurposed B2 test stand. Galloway said that people in most of the area around Stennis will be able to hear those engine tests. He added that it will be the largest engine tested at the site since 1970.