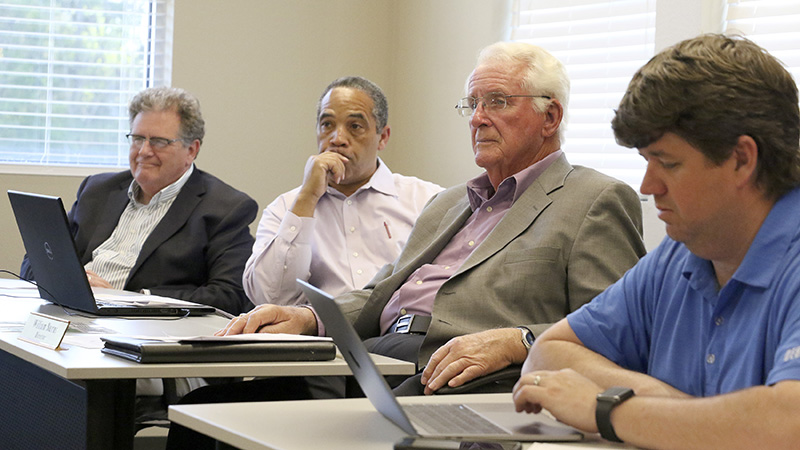 MONTHLY UPDATE: Members of the Pearl River County Utility Authority Board of Directors, from left, Ernie Lovell, Chuck Jones and William Burns, along with Brooks Wallace of Dungan Engineering, listen to an update on projects ongoing by the Utility Authority. Photo by Jeremy Pittari

Members of the Pearl River County Utility Authority’s Board of Directors heard about ongoing projects that are improving sewer services in the county during Thursday’s meeting.

Executive Director Cliff Diamond said that work to construct a low-pressure sewer system in the Eagle Heights subdivision recently resulted in the connection of about a dozen homes. About 65 homeowners signed up to connect to the system when it is complete.

In relation to the work to relocate utility lines in anticipation of the widening of Highway 11 by the Mississippi Department of Transportation, the state agency recently alerted the Utility Authority that some flexibility has been granted pertaining to approved methods for the relocation of sewer lines. Diamond said that MDOT representatives informed the Utility Authority that piping can be used in lieu of relocation in some areas, which is much less intrusive to the nearby businesses. Some lines will still need to be relocated, he said.

Work to rehabilitate other sewer lines within the city of Picayune as part of a city-wide upgrade is about 70 percent complete. The work involves installing a polymer inside lines that are still in good shape, and replacing those in the worst shape. During Thursday’s meeting, the Board approved a motion to issue a $446,095 payment to the contractor.

Discussion concerning the finalization of acquisition of the wastewater treatment facility in Millard near the county jail was moved to executive session. After the Board reentered open session, Diamond said the Board decided not to take action on the matter. He said that the matter was tabled because the Pearl River County Board of Supervisors is still working out land title issues for the facility. Diamond said he expects the matter to be on next month’s agenda.

In another matter, the Board approved a motion to waive the tap fee for a new voting precinct being constructed by the Board of Supervisors using community donations. Diamond said the work to install the tap will be conducted by county employees so there is no expense to the Utility Authority. The precinct will double as a community center and be constructed at 780 S. Beech St. in Picayune.