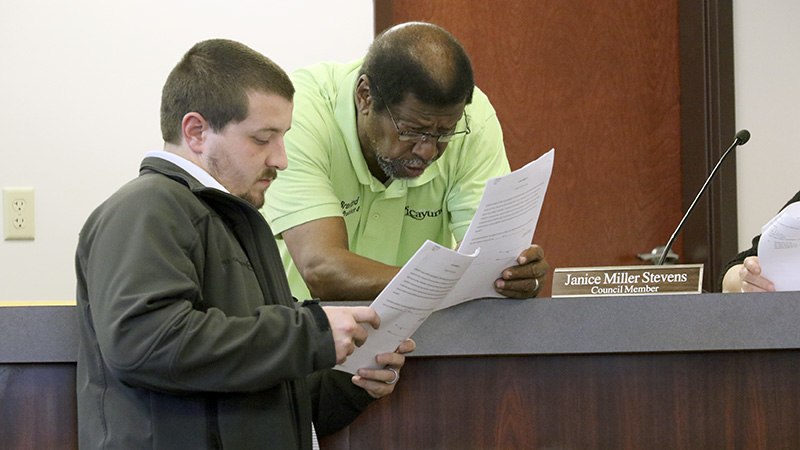 AWKWARD WORDING: Jonathan Hickman and Councilor Larry Breland look over a letter from MDOT outlining the state agency’s intent to cover overages in relation to the relocation of utility lines in preparation for the widening of U.S. 11. Breland said the wording is confusing and asked for clarification. Photo by Jeremy Pittari

Work along Highway 11 may be sped up with a change to the project recently requested by the Mississippi Department of Transportation.

Jonathan Hickman with Dungan Engineering informed the Picayune City Council that a recent meeting with MDOT entailed implementing a method to expedite relocation of utility lines. Hickman said the state transportation agency will now allow all remaining utility lines to be relocated via boring as opposed to the previous method of digging them up.

Not only will boring speed up the process, but also mean that the remaining businesses along the path of the project will not be affected by digging up the entrances.

The change is part of MDOT’s goal to begin its part of the work in widening the highway by the fall, and in order to do that the utility lines need to be relocated by the summer, Hickman said.

Any additional expense in boring the lines instead of digging them up will be absorbed by MDOT. The Council was assured that the city will still only need to cover the initial expense outlined when the project was proposed, $68,250 to relocate the natural gas lines and $371,800 to move the water lines. The expense to relocate the sewer lines will be the responsibility of the Pearl River County Utility Authority.

The Council approved a motion to sign the utility relocation agreement with MDOT contingent upon the city’s portion of the cost for the work staying the same.

The Council also approved a motion to apply for grant funding to hold a hazardous waste collection day. Grants Administrator Christy Goss said the grant would be for $25,000 and allow the city to hold a day where citizens could bring their hazardous waste for recycling.

Last year the event was set to last from 8 a.m. to noon, but closed a half hour early because they reached their limit of waste that could be collected using the available funding.

Goss said she expects to hold the collection day before the weather gets too hot, if the grant is approved.

A motion was also approved to allow the Rotary Club of Picayune to plant trees along Cooper Road near the entrance of The Woods subdivision. Public Works Director Eric Morris said the idea is that when the trees mature they will act as a sound barrier between the subdivision and Interstate 59. The trees will replace trees that were previously in that area, but had to be cut down because they were dead.

Naval Meteorology and Oceanography Command speaks to Exchange of…