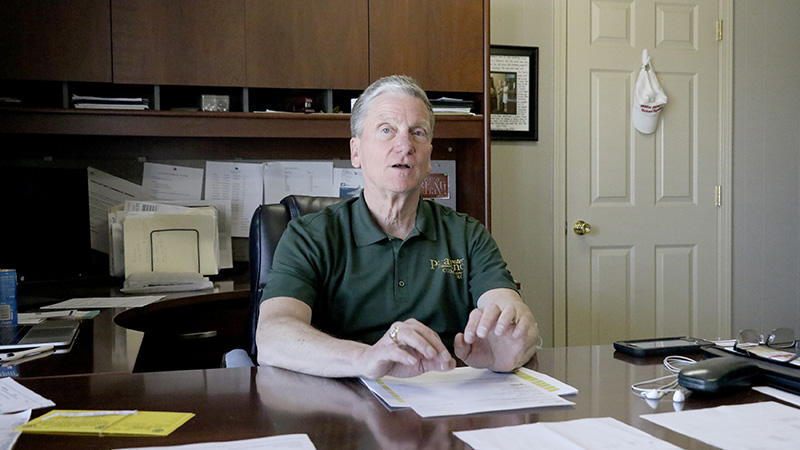 NEW LEADERSHIP: Under Terry Farr’s leadership, the Greater Picayune Area Chamber of Commerce has increased membership numbers and opportunities for members to network through Chamber events. Photo by Jeremy Pittari

Membership is climbing and so is participation within the Greater Picayune Area Chamber of Commerce.

Terry Farr assumed the role of Executive Director back in August of 2017, and since that time his goal has been to not only increase membership, but also participation at Chamber events.

When he took over almost a year and a half ago, membership was at about 200, he said. In that time since, membership has increased by about 100.

“I want more businesses to join the Chamber and more members to attend our events,” Farr said.

The reason for that is not for the Chamber to make money, it’s so the businesses increase their visibility in the community and thereby meet new people.

“Then chances are good you will make more money because you made those contacts,” Farr said.

Part of the reason membership has increased is due to the increase in events being held by the Chamber. From “Just for Fun Lunches,” to “Morning Call” breakfasts, to “Business After Hours” events, in the past year and a half there have been more events for Chamber members to make those new contacts.

Since January of last year, the number of sponsors has also grown. Farr said the Chamber had just six business sponsors at that time, but as of this week there are 41.

Last year, the Chamber added an event held at Crosby Commons where attendees got to watch a Saints game on a large screen while sitting in lawn chairs or on blankets.

Those are the kind of events Farr hopes will not only draw in locals, but people from other parts of the region.

Chamber staff also conducted a raffle last year for a brand new car, the proceeds of which will be used to establish a scholarship fund for students at Picayune Memorial High School and Pearl River Central High School.

Coming up, on April 18, an annual meeting for Chamber members will be held at Sun Roamers RV Resort. Farr said the two-hour event, set from 5:30 to 7:30 that evening, will start with a 30-minute update about the Chamber.

“After that, we’re going to have fun,” Farr said.

While the car raffle was a bit of a gamble, not turning a profit for the Chamber until a couple days before the drawing, a new raffle that is now ongoing is taking a new approach. It’s essentially a 50/50 raffle where the winner will split the pot with the Chamber. Each ticket costs $100 and only 1,000 tickets will be sold. The drawing is set for Dec. 14, but Farr said that if all 1,000 tickets are sold before that date, the drawing will be held earlier.

Another project he would like to implement is a leadership workshop for a few students attending the Picayune and Pearl River County school districts. Details concerning that project are still in the works, but his goal is to gather ideas from those children to find ways to entice more young people to make their living in Pearl River County after graduation as opposed to moving away to another part of the country.

It’s these and several other benefits that the Chamber offers its members.

“All businesses in Pearl River County Should be a member of the Chamber,” Farr said.