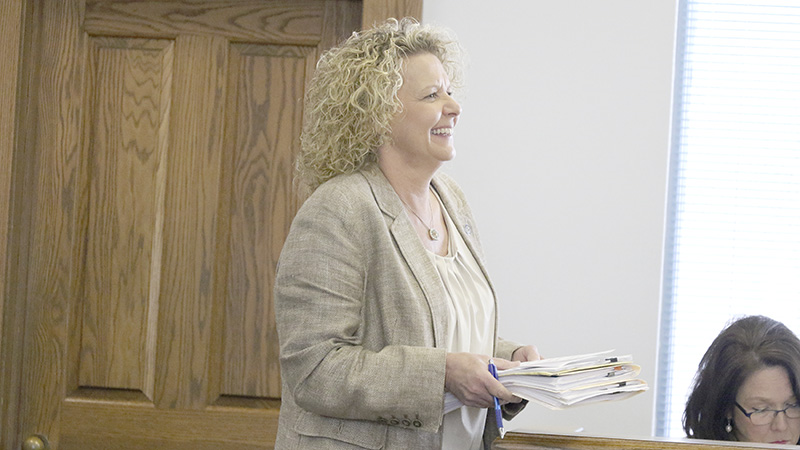 Circuit Clerk Nance Stokes speaks to the Board of Supervisors about the purchase of new voting machines. Photo by Jeremy Pittari

At the beginning of Wednesday’s Pearl River County Board of Supervisors meeting, the Board recognized a Vietnam War veteran who was also a prisoner of that war.

Col. Todd Ryder and two members of Pearl River County School District’s NJROTC asked Kay Perry, a Vietman War POW, to stand before the Board and be recognized. Afterwards, District III Supervisor Hudson Holliday made a motion for the Board to draft a letter of recognition for Perry, which was approved.

In other business, the Board heard about efforts to repair roads and bridges in the county. Les Dungan with Dungan Engineering presented the Board with a bid from Huey Stockstill LLC to conduct paving work along FZ Goss Road. The bid was for $506,598, a bit more than Dungan’s estimation of $498,000. Dungan said that the road is about three and a half miles long, and also needs base repairs. Dungan said he worked with the contractor to bring that bid down from $523,200 by modifying the type of striping that will be used.

District IV Supervisor Farron Moeller said the money to conduct that work will come from BP settlement funding, and that Rep. Timmy Ladner was instrumental in the project receiving that funding.

Soon, Dungan said he will be ready to advertise for bids to repair a bridge on Lakeshore Drive in the Anchor Lake subdivision.

Bridges currently under construction include those on Oscar Smith Road, Sones Chapel Road and Shenandoah Road.

Repair of a bridge on Nellie Burks Road will take place after the project on Oscar Smith is complete, Dungan said.

The Board approved a motion to purchase new voting machines at a cost of $269,301. Circuit Court Clerk Nance Stokes said that price includes credit for trading in the old machines along with set up and training.

Stokes also told the Board that $75,000 was awarded to the county as part of the Help America Votes Act. She said that money will be used to make voting precincts complaint with the Americans with Disabilities Act.

In other business, the Board accepted the resignation of Danny Joe Slade as the county litter control officer, and appointed Jason Lee with the Pearl River County Sheriff’s Department to that position.

The next Board meeting will be April 1, at 9 a.m. in the courthouse on Julia Street.

Council informed utility lines can now be bored for…