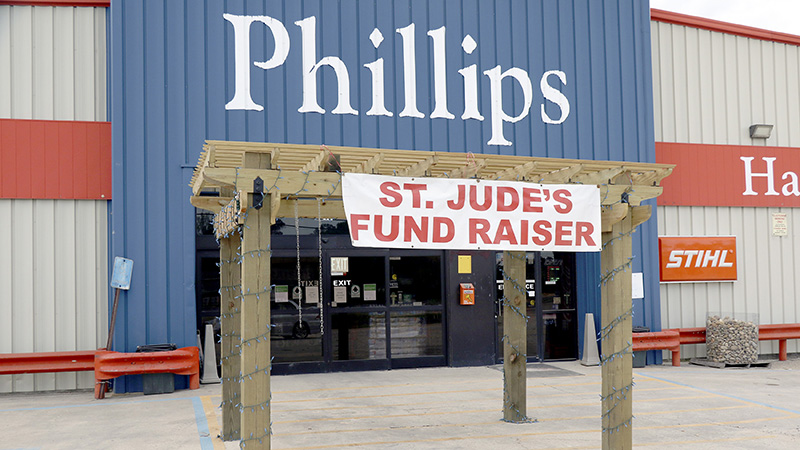 RELAXING PLACE TO SWING: This arbor and a swing, which is not pictured, are being raffled at Phillips Building Supply in Picayune. Photo by Jeremy Pittari

For the third consecutive year, Phillips Building Supply in Picayune will raffle off an item to raise funds for St. Jude’s Children’s Research Hospital.

This year’s prize is an arbor complete with a swing. Phillips Building Supply of Picayune Manager Jerry Matthews said the winner will be announced on May 1. If the winner is unable to transport the arbor and swing to their home, Matthews said his staff can deliver it to the winner’s home.

Last year’s raffle for a gazebo raised a total of $1,500, which was donated to St. Jude.

This year’s prize was constructed by Aubrey Kellar and Vincent Frisella. Kellar assisted with last year’s build of the gazebo.

“He’s always a big player in that,” Matthews said.

Raffling off outdoor structures to raise money for St. Jude’s Children’s Research Hospital by Phillips Building Supply began in 2016. It all started with a gazebo that was featured on local business’ float in that year’s Civic Women’s Club of Picayune’s annual Christmas parade.

Initially, the thought was to sell the gazebo after the parade was over, but Matthews and his staff came up with the idea to raffle it off and donate the funds to the research hospital. It’s been an annual event ever since.

Strawberries and Cream set for Sunday