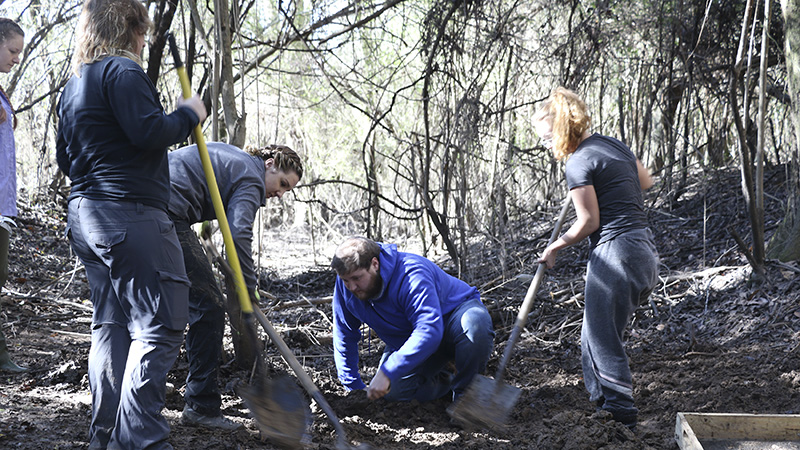 LOOKING FOR EVIDENCE: Anthropology students from the University of Southern Mississippi dig at one of two sites where a cadaver dog indicated remains could be present. Photo by Jeremy Pittari

A 16-year-old case was revived this month leading investigators with the Pearl River County Sheriff’s Department to search the area of the West Hobochitto Creek for evidence.

This case began back in 2002, when on June 22, family members reported that their loved one, 24-year-old Erin Hover, who also used the last name Davis, according to previous coverage by the Item, was determined to be missing from her home.

A story that published that week in the Item states family members arrived at her Nicholson home to find she was missing. Other unusual aspects of the case involved the fact that her two young children aged 2 and 4 were there alone and her purse had been left behind. The story states that she was seven months pregnant at the time of her disappearance.

Chief Investigator Marc Ogden said the dog alerted to the presence of remains in two locations 75 feet apart within that area on two different occasions, prompting the investigative team to request the assistance of the Medical Examiner’s office and the University of Southern Mississippi’s Anthropology Department.

Wednesday morning the teams gathered in the wooded area near the creek to see if any remains could be located at the areas the cadaver dog indicated by using hand held tools.

Dr. Marie Danforth, professor of anthropology at USM, said she brought about eight graduate students Wednesday morning to assist in the search.

They began by using rakes and shovels to remove small amounts of dirt at first, later digging a test pit to test for variances in the soil.

While the teams were digging up the area, the dog was brought out to see if it would alert to the presence of remains once again.

The dog again went to the same areas, hunched over the dirt dug up by the anthropology students and barked, before digging at the loose dirt and hole from which it was removed.

Danforth was not optimistic that remains would be found at the site due to the length of time Davis had been missing, combined with the fact that the area was a flood zone.

Pearl River County Coroner Derek Turnage said that according to his research, the area around the creek is filled with flood water at least five to six times per year.

Dr. Steven Symes, State Forensic Anthropologist with the State Medical Examiner’s Office, also assisted with the search. He commended the local law enforcement agency for seeking a conclusion to the case of Davis’ disappearance.

He too was not optimistic, since he said that searching for remains in a 16-year-old case is like searching for a needle in a haystack.

By the end of the effort, Ogden said that evidence of her remains was not found, but the investigation will continue.