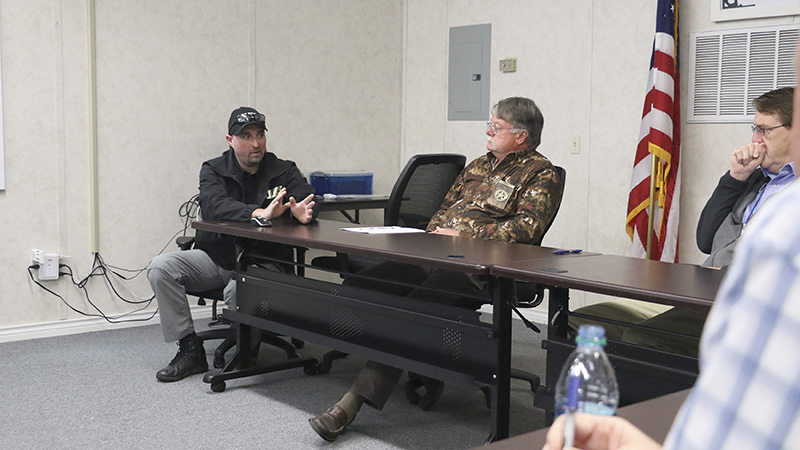 GETTING EVERYONE ON BOARD: Pearl River County School District Police Chief Brandon Herrin speaks with Sheriff David Allison about his deputies and investigators downloading a cellphone application that can alert them when an emergency situation has arisen on a school campus. Photo by Jeremy Pittari

PRC Campus Police Chief Brandon Herrin presented members of the PRC District Crisis Team with information concerning a cellphone application that can alert campus and area law enforcement agencies of an emergency situation, such as an active shooter.

The app, called the Hero911, works with 911 communications and cellular towers to alert officers and staff that a situation is underway. When activated by a teacher or other staff member who is on campus, it alerts all other staff, campus law enforcement and any law enforcement officers near that location that there is an emergency. Herrin said the app utilizes GPS navigation to provide emergency responders with the location of the emergency and prevent the staff member from activating the app when they are not on campus.

A test was conducted recently with staff members of the District, and Herrin said the notification was almost immediate.

Other precautionary measures taken in the District include panic bars on the doors of each classroom and the ability to close the window of each door, more fencing around each campus and controlled access doors into the buildings.

The team also discussed a reunification plan so parents can pick up their children in a safe place. Discussions focused on finding a nearby church to bring the children where parents could pick them up in an orderly fashion.

There is a tentative plan in place for reunification, but it’s still being discussed to determine the best place that would not affect local traffic while parents pick up their children.

Once that plan has officially been established, Superintendent Alan Lumpkin said the information needs to be shared with all parents via the website. If a situation does occur, parents will be notified that day of the reunification location.

He added that all of these plans are necessary, but do not guarantee the safety of children and staff. No matter how high the fences are, the effectiveness of controlled access doors and other safety equipment, it will not prevent someone with intent from firing on children or staff from another vantage point, Lumpkin said.

“Unfortunately there are some sick people in society,” Lumpkin said.

He asked all of his staff to pray for the safety of the District as they work to come up with plans to keep the kids and coworkers safe.