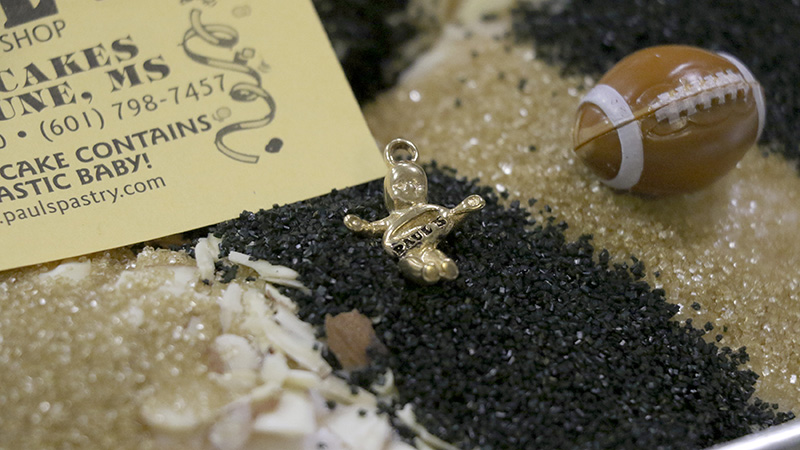 Paul’s Pastry is in the Mardis Gras mood and as such the staff are churning out king cakes day and night.

Owner and operator Sherri Thigpen said she has shifts working at all hours preparing dough, filling the pastries and decorating them before the confections are placed in the store for sale, or sent across the country.

This year, Thigpen is doing something a bit special. In honor of the team who should be playing the Patriots on Sunday, she and her staff are making Saints themed king cakes.

Additionally, once each day this Super Bowl weekend she will put a special “gold” king cake baby in one king cake that is worth $100. The gold baby was commissioned and designed by Molly McNamara, a New Orleans based artist. The special baby is made of solid bronze, plated with 24 carat gold and holds the “Paul’s” logo.

Thigpen said she had 20 of the special babies made. The other 18 babies will be inserted in king cakes during various days after Super Bowl weekend, Two days during the week customers have a chance to find a baby and each Saturday and Sunday until Mardi Gras day there will be a gold baby in one cake.

She said the special babies were made by a local jeweler and are valued at $100 each. The king cake with the gold baby will have that item sealed in plastic and placed under the cake. A plastic baby will still be inside the cake, Thigpen said.

While Paul’s Pastry makes king cakes year round, the Mardi Gras season has the staff making thousands of the regional favorites. During a typical season, Thigpen said the bakery uses 36,000 pounds of cream cheese, 63,000 pounds of flour and 26,000 pounds of fruit filling to keep up with demand.

Raspberry Amaretto cakes will feature raspberry filling and an almond glaze with almonds that have been roasted and candied. Italian Cream Cheese cakes feature cream cheese, pecan and coconut filling with a cream cheese glaze topped with pecans and coconut.

The local bakery also plans to expand its shipping territory to include Canada next week, Thigpen said.