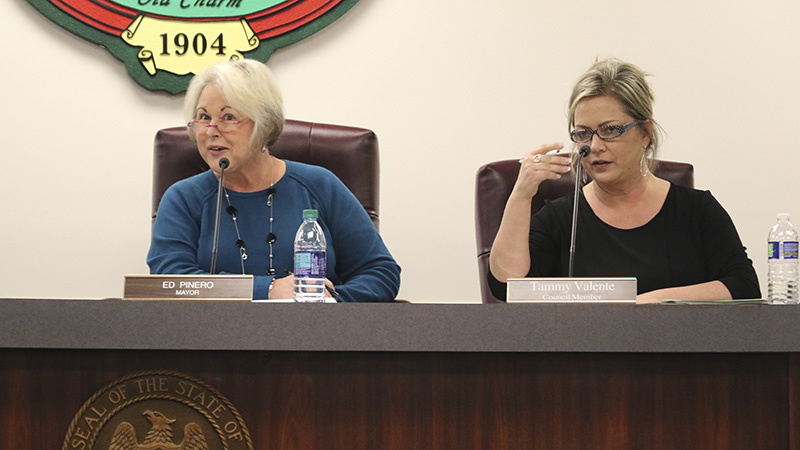 PRO TEMP: Councilor Jan Stevens Miller, at left, stands in for Mayor Ed Pinero in his absence during Tuesday’s meeting. At right is Councilor Tammy Valente. Photo by Jeremy Pittari

The project will be funded 100 percent by Amtrak and provide additional lighting and a wheelchair enclosure on Norfolk Southern Property near the loading and unloading dock, along with improvements to the rear deck of the city’s Intermodal Transportation and Tourism Center, said City Manager Jim Luke. The train whistle on the rear deck will also be relocated as part of the work.

Public Works Director Eric Morris said improvements to the rear deck will include installation of decking material that is resistant to rot.

The city will only be responsible for the maintenance of any improvements on city property.

Relocation of some of the memorial bricks at the site will be part of the work, Luke said.

The Council also received the results of the most recent audit. Julie Uher with Holt and Associates said no material weaknesses or significant findings were reported in the audit.

Councilor Larry Breland asked for a grade of 1-10 on the audit, with 10 being the highest. Uher said the city is still in the high 9 ranking, and that she is “one of those teachers who never gives out an A plus.”

Breland and Councilor Wayne Gouguet then gave City Clerk Amber Hinton and her staff praise for their hard work in maintaining the city’s finances.

In other business, the Council approved a motion to enter into an interlocal agreement with the Pearl River County Board of Supervisors concerning work at Friendship Park to install an asphalt road to the field where Buddy Ball is held.

County road crews will provide the labor, with the city providing the asphalt.

Parks and Recreation Director Trevor Adam said the project will go a long way to improving that area of the park, which is where the T-ball fields are located.