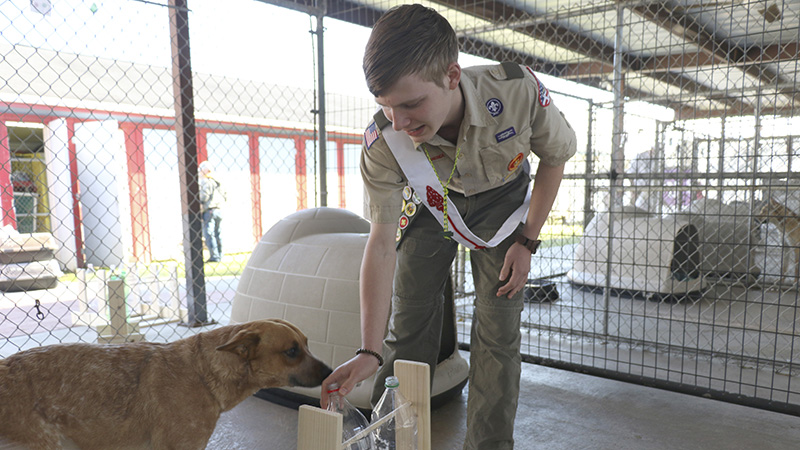 TEST RUN: Kade Swanson, a Boy Scout with Troop 2, decided to make these treat dispensers for dogs at the Pearl River County Animal Shelter. He and his fellow Scouts made 22 of the devices, comprised of plastic bottles and some pieces of wood. Photo by Jeremy Pittari

Kaden Swanson, a Boy Scout with Troop 2 in Picayune, is working on achieving the rank of Eagle Scout. Part of that process is for each Scout to complete a project to better their community. Inspiration for his project to build treat dispensers came from a post on social media by Lauren Fitts with the Animal Advocates of Pearl River County.

The design calls for 2-liter bottles and some wood components. By drilling holes in the bottles and inserting wooden rods connected to a wooden frame, treats can be dispensed by the dogs when they tilt the bottles. It takes a bit of time for the dogs to learn how to use them, but after only a few introductory tilts they get the idea, Swanson said.

Swanson choose to create the dispensers because he loves dogs. He enjoys their company so much that even though he has bulldogs of his own, he will often make visits to the local animal shelter to bring them treats.

Employing the assistance of a number of fellow Scouts, he ended up making 22 of the treat dispensers in a matter of days, which he recently placed in the dog pens at the shelter.

As he did, he took a moment to pet each dog and show them how to get treats from the clear plastic bottles.

Before bringing them to the shelter, he tested the homemade devices out on his own dogs. Knowing that the bottles will get chewed up by the canines, he brought extras so shelter staff can keep the dispensers functional a bit longer. He also brought some extra treats to keep the dispensers full.

While the local high school student hasn’t decided what career path he will pursue upon graduation, for the time being he enjoys being a Scout because it gives him the opportunity to go camping and learn about the outdoors.