District, Teachers of the Year announced at Picayune 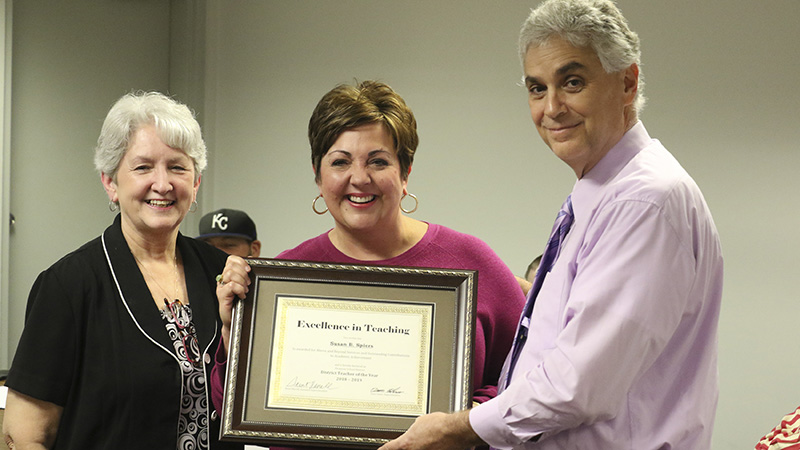 BEST OF THE BEST: Susan Spiers, pictured center, was named District Teacher of the Year for the Picayune School District. She is joined by South Side Upper Elementary Principal Debbie Smith and Superintendent Dean Shaw. Photo by Jeremy Pittari

Seven teachers within the Picayune School District were recognized for their dedication to the education of their students during Tuesday’s Board of Trustees meeting.

Jill Smith, the District’s Assistant Federal Programs Coordinator, said that to be a teacher can be defined in many ways, but to really be a teacher is to love the job.

Nicholson Elementary Principal Lisa Howie introduced Whitney Knowles as that school’s Teacher of the Year. Howie said that Knowles was chosen by her peers to receive the designation because of her positive and encouraging approach to inspiring her students. She was also recognized for her positive approach to communicating with parents and her ability to brighten everyone’s day.

Roseland Park Elementary Principal Kim Massengale introduced Sherrie Hoffman as that school’s Teacher of the Year. Massengale described Hoffman as a hard working employee who not only teaches kindergarten, but also acts as a first grade behavior modification instructor. She is also a member of the high school’s band booster club and serves as the school’s color guard director.

South Side Lower Elementary Principal Christie Pinero introduced Pam Fluitt as her school’s Teacher of the Year. Fluitt was described as someone who can identify students who need extra help and provide it. Fluitt is also able to provide teachers with methods to meet a student’s individual needs and acts at the teacher in charge when Pinero is not on campus. Not only is she the school’s librarian, she also acts as testing coordinator and plays a big role in the school’s accelerated reader program.

South Side Upper Elementary Principal Debbie Smith said that Susan Spiers was chosen as that school’s Teacher of the Year because of her influence in her student’s lives. Her work as the teacher in charge of the school, testing coordinator and gifted teacher, just to name a few, were also noted. Smith read a letter from a former student, which outlined how Spiers’ influence not only helped the student become more confident and prepared for high school level projects, but attend two ivy league colleges.

At West Side Elementary, Christina Carlberg was introduced by the school’s Principal, Kerri Wilder, as the Teacher of the Year due to her excellent work as the school’s behavior modification teacher.

Wilder described Carlberg as the one beginning behavior modification teachers go to in order to learn how to do the job right. She has the ability to entice children who previously resented attending class to look forward to it.

Picayune Junior High Principal Jim Breeland named Lorraine Ackerman as the school’s Teacher of the Year. In her role as a seventh grade math teacher, she has excelled in getting students to not only succeed, but buy in to the curriculum. Breeland also read a letter from one of Ackerman’s previous students, which states that she should not simply be Teacher of the Year, but Teacher of the Century.

At Picayune Memorial High School, Principal Kent Kirkland introduced Kay Smith as the Teacher of the Year. He said that she is not only a great English teacher, but was instrumental in implementing an ACT prep course, which has helped at least one student increase his score in the English section of the test from a 17 to a 33.

At the end of the presentations, Superintendent Dean Shaw announced that this year’s District Teacher of the Year is Susan Spiers.