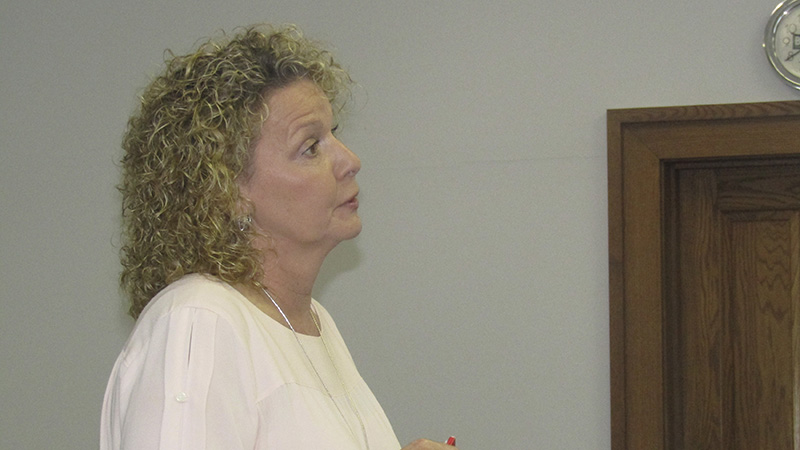 BACK TO BASICS: Circuit Clerk Nance Stokes explains a new proposed voting technology to the Board of Supervisors during Monday’s meeting. Photo by Brian Graves

The Board of Supervisors unanimously approved a plan during Monday’s meeting to purchase new scanners and ballot marking devices that are ADA compliant from Elections Systems and Software, headquartered in Omaha, NE.

County Administrator Adrian Lumpkin said the cost of the new system – $60,000 per year for five years – exceeds the amount state law would allow the Board to purchase without going out for bids.

Lumpkin said he would check to see if the company is part of a state contract or is part of any other exemption to that bidding requirement before a purchase is made. If not, he will start the process to advertise for bids.

Under the new system, a voter is given a coded ballot after signing in at their voting precinct.

Private booths will be available for voters to sit and mark their ballot.

Voters will then take their ballot to the scanner, scan it in and their vote is tallied.

Circuit Clerk Nance Stokes said the scanners can accept and record votes from  up to 1,500 voters, meaning some larger precincts will have more than one scanner on Election Day.

Stokes said it appears there is a “big push across the nation to go back to the electronic scanners and the paper ballots and get away from the machines.”

“That’s kind of surprising,” she said, noting that even with the TSX machines there is a requirement to print paper ballots for 65 percent of the voters.

“We have stacks of ballots that don’t get used,” Stokes said.

She said voters have lodged complaints during the use of the current machines due to “the wear and tear of 15-year-old machines.”

Election Commissioner Tommy Breland said preparations for the scanning machines for elections would be “much simpler than they are now” when compared to the touchscreen units.

Nance said the larger counties in the state have already begun using the scanner method of voting.

“In talking to the other clerks, everyone seems to like it,” she said.

“They were like we are. When the TSX machines got older, they started having a lot of problems with them.”