City, County give update to Chamber 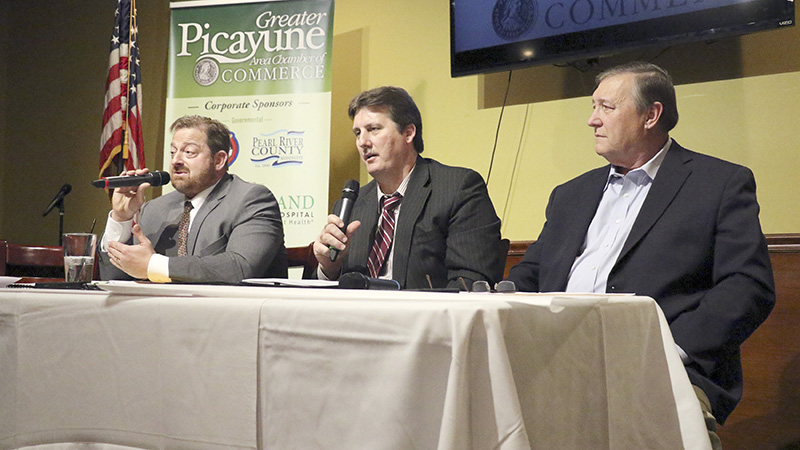 Thursday evening representatives of the Pearl River County Board of Supervisors and Picayune City Council spoke to members of the Greater Picayune Area Chamber of Commerce.

The panel updated attendees of the event about plans for the coming year and things they would like to see accomplished.

Board President Sandy Kane Smith gave the crowd an update on progress with the construction of the annex to the county courthouse, saying it’s a necessary addition to the services offered to citizens. County Administrator said the county will be able to build that addition without having to raise taxes due to two previous debts rolling off in the next two years. The county currently pays $830,000 a year in debt service, most of which was for the construction of the jail in Millard.

Total debt, with the annex factored in, for the county is currently at $14.5 million. Lumpkin said that state law allows a county to have a maximum debt of $56 million, so Pearl River County has relatively low debt.

Smith said that work to repair bridges in the county has been successful. Last year 11 bridges were replaced or repaired to ensure they would remain operational.

Two more are currently being worked on and three more are slated for repairs at a later date.

Efforts to establish an Economic Development Council has stalled due to a  lack of funding, Smith said. The Board is also having trouble hiring an executive director for that Council. Anyone with the experience required has been requesting $120,000 per year to take the job.

But there are still efforts to bring in more companies. Smith said a new business that produces products for the oil field industry is slated to locate along Highway 11 soon.

City Manager Jim Luke spoke about several plans within the city of Picayune. One entails a team effort with the Board of Supervisors to pave Jackson Landing Road from the intersection of Grover Barrett Road to Union School Road.

There are also discussions between the two governing bodies about the possibility of holding municipal court proceedings in the courtroom at Chimney Square, and the consolidation of 911 services countywide.  In terms of efforts by the Council, Luke said discussions are gaining ground on the possibility of building a new police station.

Jury finds father and son guilty in relation to…