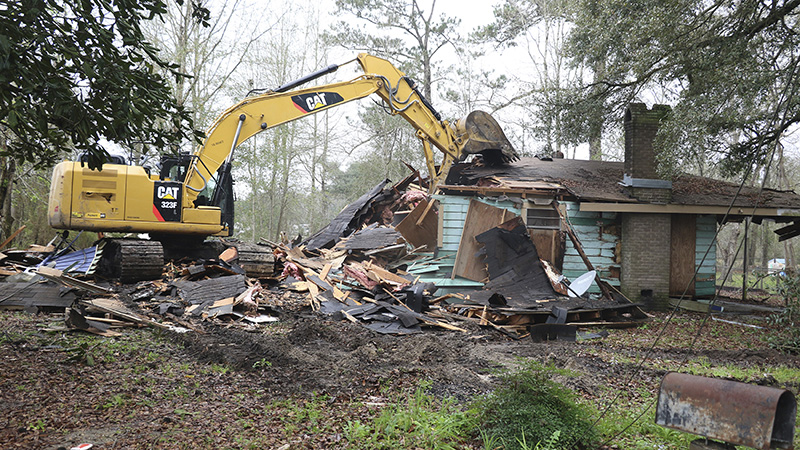 Two homes within Picayune were demolished Friday morning by employees of the city’s Public Works Department in conjunction with the Code Enforcement office.

Code Enforcement Officer Tom Milar said that the homes, located at 714 S. Blanks Ave., and 520 N. Curran Ave., were demolished because repeated attempts to convince the owners to conduct the necessary repairs failed.

The home on South Blanks Avenue was eventually condemned in November of last year. Milar said the home had holes in the roof, floor and was unlivable. The owner eventually moved out, leaving it to become a den for drug users, Milar said. Attempts to board up the entry points were negated by those wanting to use it for the illegal purposes.

The home on Curran Avenue was damaged by a fire back in 2015. Milar said the owners began repair work on the structure, but only succeeded in replacing the roof before work ceased. Eventually the owners ran electricity to the home illegally from the temporary power pole using internal electrical wire, posing a fire hazard. When contact with the owners ceased, the City Council approved demolition of the building.

Milar thanked the efforts of employees within Public Works for their assistance in demolishing the homes, the cost of which will be assessed to the property owner’s taxes in the form of a lien.

Public Works Director Eric Morris said the cost to demolish the buildings will be assessed at the federal government approved FEMA rate.

Thomas Crawford enters plea for murder of his grandmother…