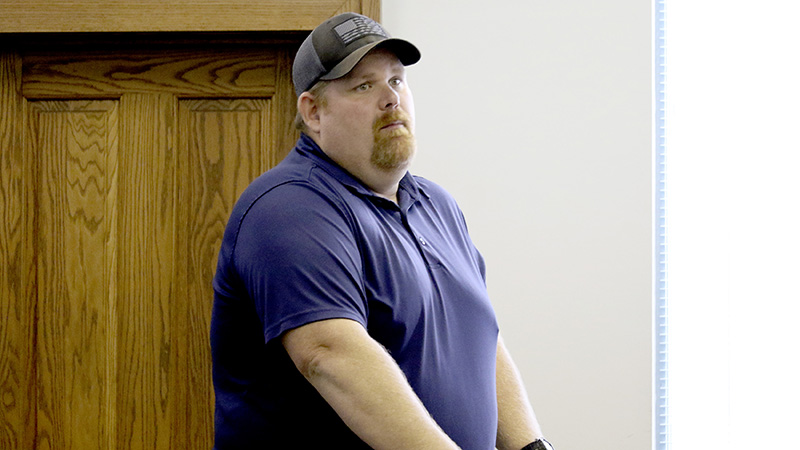 STRONGER, CLEANER: Pearl River County Code Enforcement Officer Kolby Davis addresses the Board of Supervisors about the need for more stringent property maintenance codes, and allowing him to write citations for violations. Photo by Jeremy Pittari

Code Enforcement officer Kolby Davis said that the number of houses built last year is down from the year prior, but was still an exceptional number. In 2017, there were 264 homes built within the county, last year that number was 156.

During the same time frame, Davis said he was able to close out 28 property maintenance cases, which was two-thirds of the cases opened during that period.

As he heads into this year, Davis said there are 40 property maintenance cases that need to be addressed. He said part of the issue is that there is no way to put bite in his cases. While there is an “end game” to the property maintenance ordinance, getting to that point is costly and time intensive.

District III Supervisor Hudson Holliday said that property maintenance is an issue that needs to be addressed within this county. He recalled an instance where he came across a man changing the tire on his vehicle in the middle of a public road. Hudson said the man was changing the tire in the road in front of his own home because there was no room in his yard due to the amount of junk the man had collected.

“When you start doing that, it gets people’s attention,” Davis said.

Davis said he is in the process of presenting the 2018 building codes for adoption by the Board soon.

During Monday’s meeting, the Board also approved a motion to join with the city of Picayune, who is organizing a countywide cleanup effort in conjunction with the Great American Cleanup.