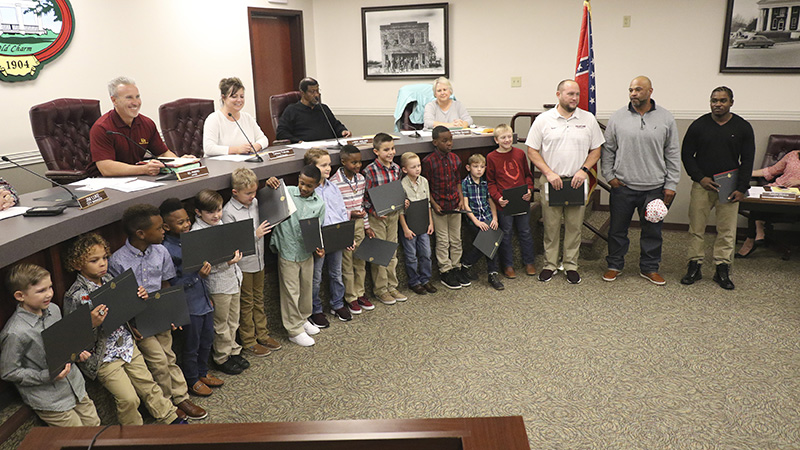 STATE CHAMPS: Picayune’s City Council recognized the Maroon Tide 7- and 8-year-old football team for winning the state championship title for the second year in a row during Tuesday’s meeting. Photo by Jeremy Pittari

The discussion began with a motion to approve $144,315 in grant funding from the Mississippi Department of Transportation. Jonathan Hicks with Dungan Engineering said that the project will build sidewalks on the north end of Highland Parkway from the intersection of U.S. 11 to the entrance of Trinity United Methodist Church in the Woods Subdivision. As part of the grant, the city will have to pay 20 percent of the total project expense, estimated to be $194,825. The city’s request for the grant funding included a request for lighting along the same stretch of road, but MDOT only approved funding for the sidewalks, said Brooks Wallace with Dungan Engineering. He added that the funding has been provided as part of MDOT’s Transit Alternatives Program, which combined all previous programs, including the Safe Routes to School grant program.

During discussion of the agenda item, Councilor Wayne Gouguet suggested the city start looking into finding funding for sidewalks for the downtown area, specifically crossing the railroad tracks. Councilor Tammy Valente said she would like to see sidewalks for children attending Roseland Park, who have to walk in the street due to a lack of sidewalks in that area. Councilor Lynn Bogan Bumpers asked for repairs to existing sidewalks along East Canal Street.

After the discussion, the Council approved a motion to accept the grant.

The Council also recognized this year’s 7- and 8-year-old members of the Maroon Tide, who won the Mississippi Coast Youth Championship for the second year in a row.

Mayor Ed Pinero said the team finished the season with a 22-0 record, and only allowed opposing teams to score 6 points all season.

The team competed against 25 others in the region to win that title.

The next meeting of the Council will be Jan. 15 at 5 p.m. in the Council chambers of City Hall.