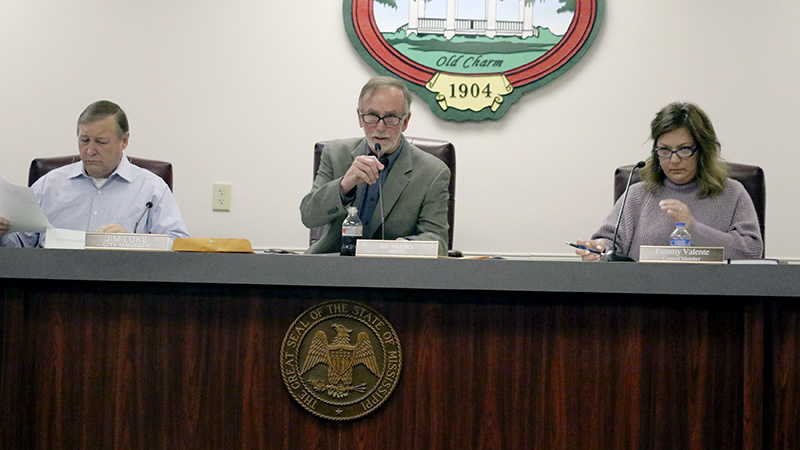 FILLING IN: Mayor pro tempore Wayne Gouguet stands in for Mayor Ed Pinero during his absence in Tuesday’s meeting. At right is Councilor Tammy Valente. Photo by Jeremy Pittari

Public Works Director Eric Morris said the city received about $76,000 in funding from the grant last year. The funding, provided in the CDC Grant through the Mississippi Department of Health, is used to trap and control mosquito populations. He hopes that if the grant is approved again this year, the city receives the same amount of funding as the prior year. Morris said a match by the city is not required, and the grant could help offset some expenses already budgeted, particularly in chemicals used to control mosquitos. Grounds and Beautification Director Daryl Smith said that $28,000 was spent by the city on mosquito control chemicals last year.

Mosquitos caught in the traps are sent to the Mississippi Department of Health for testing to determine if West Nile or Zika is present in the insect’s local population.

This round of grant funding could also include funding for temporary manpower, allowing current city employees to focus on other aspects of the city.

The Council also approved a motion to award the lowest and best bid for improvement work at the water tower near Walmart in the city.

Morris said this job will be last of four water towers in the city to receive the work, which includes a new paint job and an interior coating. When this project is complete, the city won’t have to conduct similar work on city water towers for 10 to 12 years, Morris said.

The approved bid was for $209,968 and was submitted by Maguire Iron Inc.

In other business, the Council approved a motion to enter into a memorandum of understanding with Heritage Plastics concerning use of a city-owned rail spur located behind Avon.