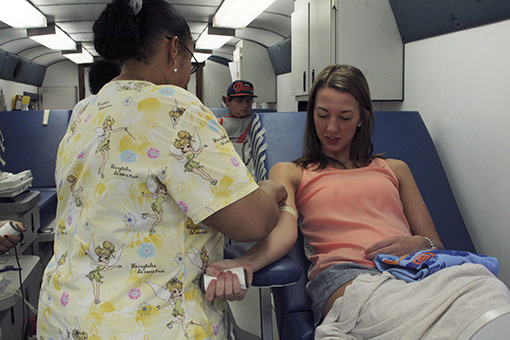 1. DONATING TIME: Emily Loveless was one of the first 20 people who donated blood inside The Blood Center’s mobile bus during a recent blood drive. File photo by Ashley Collins.

In an effort to keep supplies available, The Blood Center in Picayune will hold a blood drive at the Margaret Reed Crosby Memorial Library on Jan. 14.

Kristi Garner-Womack, The Blood Center of Picayune account representative, said that the drive is being held because the winter months are one of two times during the year when supplies of blood donations drop. The reason for the decline in donations in the winter is due to the holidays and people taking vacations. In addition, there is a higher demand for blood due to the increased rates of travel during the winter months.

Garner-Womak said the drive will be held that Monday from 10 a.m. to 5 p.m. at the library. The drive coincides with National Blood Donor Month, which was designated back in the 1970s as a way to raise awareness of the shortage of available blood donations this time of year.

Donors will receive a Saints football team themed T-shirt that features the lettering, “I bleed black and gold.”

Garner-Womak said she would like to see at least 50 people donate during the drive, if not more.

Anyone interested in donating during the drive can expedite the process by visiting The Blood Center’s website at thebloodcenter.org and clicking on the “Fast Lane” link.

There, donors can fill out the necessary paperwork before they even arrive to the donor location and spend less time at the donation site. Fast Lane applications must be filled out the day of the drive. Additional instructions are on the website.

Garner-Womak  said that donors should be aware that some of the eligibility requirements have changed. She said that previously anyone who received a tattoo or piercing would have to wait at least a year from the date of the work to donate blood. Now, however, if that tattoo was provided by a licensed tattoo parlor within Louisiana, Mississippi or Alabama, the wait period is now only 30 days. Tattoos and piercings done outside of a licensed parlor, such as at home, will still require the donor to wait one year after receiving the tattoo or piercing before providing blood.

She would also like to dispel a common misconception that people with diabetes can’t donate blood. Garner-Womak said that so long as the person’s blood sugar is under control, and the donor is feeling healthy, they could donate.

All donations are separated into three components used in the medical field to help treat people with injuries or illnesses. They include red blood cells, platelets and plasma. Red blood cells have a shelf life of 42 days, plasma is good for up to a year but platelets last only 4 to 6 days, she said.

Poplarville’s Board of Aldermen approved a motion to form a committee to find a new police chief. City Clerk Jane... read more