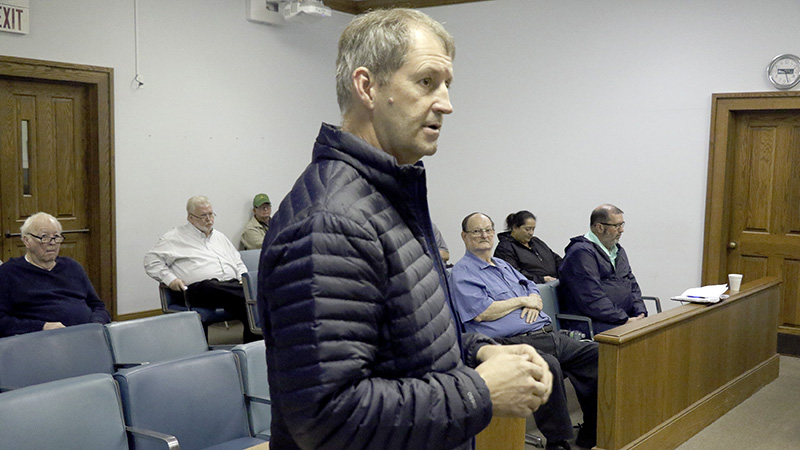 Bridge Update: Les Dungan with Dungan Engineering speaks to the Pearl River County Board of Supervisors about ongoing work to repair a bridge on Sones Chapel Road. Photo by Jeremy Pittari

Inmates and staff at the jail may encounter a temporary outage of heating and air conditioning early next week due to the replacement of HVAC equipment, but the outage is said to be temporary.

During Wednesday’s Pearl River County Board of Supervisors meeting, Board President Sandy Kane Smith said that he met with the contractor who will be replacing HVAC units on the roof of the jail in Millard. The plan is for workers to arrive on Monday of next week, and Tuesday the old equipment will be removed before new equipment is installed the same day. A crane will be used to conduct the work. Smith said fencing at the jail will not be affected.

Everything should be operational again on Tuesday, Smith said.

Les Dungan with Dungan Engineering updated the Board concerning repairs to a bridge on Sones Chapel Road. He said the project has met with significant delays due to the substrate preventing pilings from being driven into the ground. The contractor had to utilize water jetting to break through the substrate. Dungan said there are still six pilings left to install before the project can move to the next phase.

District III Supervisor Hudson Holliday addressed the Board about ensuring Pearl River County will maintain access to the $4 million set aside for repairs to the weir at Walkiah Bluff to address flow issues on the Mississippi side of the Pearl River. For the long term, Holliday said the Board should look into a way to finance long-term maintenance of the weir because “mother nature fights you all the time.”

In other business, the Board approved a motion to accept an easement near Stone Bridge so residents living in that subdivision and along Minkler Road will have an alternate route in case the railroad tracks are blocked, as they have been recently due to ongoing railroad repairs.

The Board also approved a motion to accept a bid for a pump truck for the Northeast Volunteer Fire Department for $80,000.

A motion was also approved to sign a resolution to allow power companies to provide broadband Internet access to rural areas. County Administrator Adrain Lumpkin said that during his discussions with Coast Electric representatives, he’s learned there are no concrete plans for the power company to provide that service to rural areas, however they would consider doing a feasibility study to see if providing the service would be competitive if such an opportunity presented itself.