Magri retires from city after more than 25 years of service 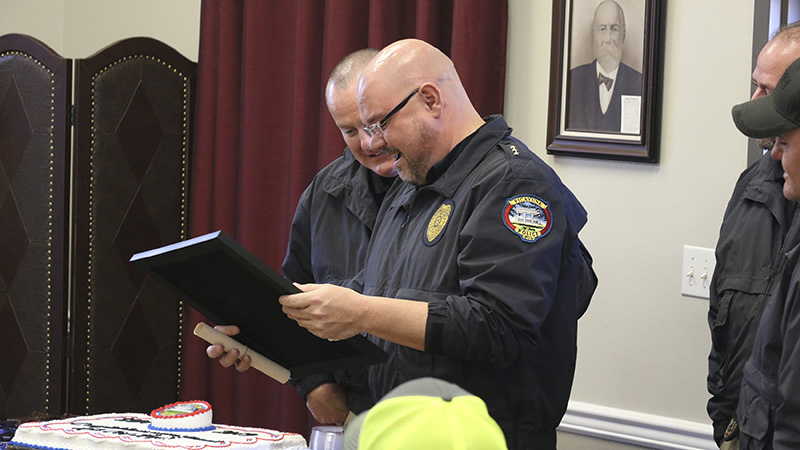 “BRUNOISMS”: Former Assistant Police Chief Jeremy Magri looks over a letter presented to him by Mississippi Highway Patrol Trooper and former co-worker Christa Groom written in what his coworkers know as “Brunoisms,” a vernacular made up by Magri consisting of words pronounced with missing syllables. Photo by Jeremy Pittari

After serving the city of Picayune and his community for more than 25 years, Assistant Chief for the Picayune Police Department, Jeremy Magri, retired on Thursday.

That afternoon, city employees and community members gathered at the city’s Intermodal Tourist Center to give him a proper send off.

Magri said he started with the Picayune Police Department as a member of the Explorer Program at the age of 16. The Explorer Program was a way for young people to get a chance to see what is involved in being part of law enforcement.

Former Picayune Fire Chief Jackie Mitchell said that Magri inquired about being a firefighter at one point, but was advised that if he wanted a more exciting experience as a first responder, he should consider a career in law enforcement.

Picayune Police Chief Investigator Lane Pittman described Magri as the glue that kept the department together and he hates to see Magri’s 25 years of experience go.

“’Everyone can be replaced,’ but can they really?” Mayor Ed Pinero said during Thursday’s retirement party.

During his time with the department, the young law enforcement officer moved up the ranks through patrol and into command, eventually taking over the position of Assistant Chief shortly after current Chief Bryan Dawsey was chosen to take the helm of the local law enforcement agency.

Dawsey said that Magri’s retirement is bittersweet because while he’s happy to see him retire at such a young age, he will miss his friend.

“He’s done an outstanding job for the department and the city,” Dawsey said. “I hope that he still comes around.”

City Manager Jim Luke said Magri’s years of experience and work ethic have been major assets to the city during his years of service.

“It is my hope that he will come back and work for the city on a part-time basis,” Luke said.

City Operations Director Harvey Miller said he’s known Magri since he was a young child due to being a family friend, and has worked with him for the past 15 years.

“I feel like we lost a fine employee. He was a go-to guy that got things done,” Miller said.

Magri said he’s worked under four police chiefs during his employment with the city, Dawsey, Jim Luke, Brenda Smith and Freddy Drennan. Now that he’s retired, Magri said he will miss the camaraderie he shared with his fellow officers and city employees, all of whom he considers to be family.

With his newfound free time, Magri said he plans to be on the Pearl River as much as possible, fishing, boating, hunting and enjoying life.

“Because not many people get to retire at a young age,” Magri said.

Magri said that his retirement is dedicated to his late mother.

“She was proud of me. I really wish she could have been here today.”

Supervisors advised not to give late fee, venue rental…