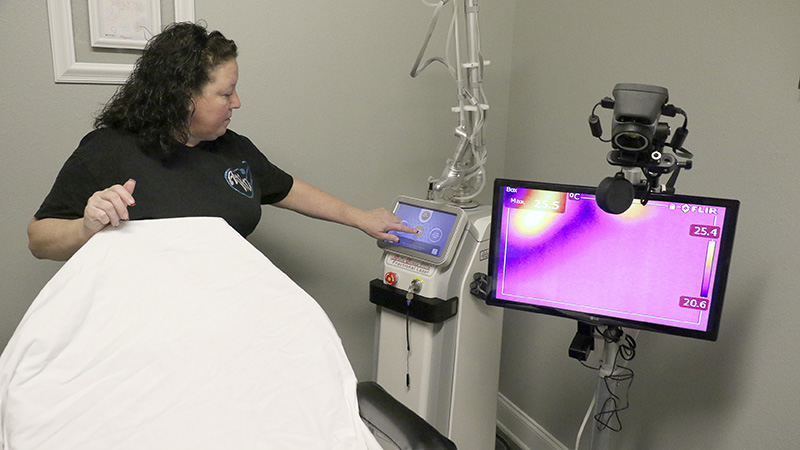 VARIED TREATMENTS: Angela Wilkins gives a demonstration of one of the five lasers available for various treatments at Glow Medical Aesthetics. Photo by Jeremy Pittari

A new business in town offers a variety of laser treatment services that are said to help with a number of cosmetic concerns.

The new business is located adjacent to Haidar’s medical practice, at 200 Country Club Rd., Suite A, to provide patients with a private experience away from the clinic’s waiting room where others may be waiting for medical care.

Wilkins said the lasers can help people with a number of cosmetic problems, such as rosacea, acne, vascular lesions, sun damage and enlarged pores.

One of the specialized lasers can also help women facing feminine health issues such as incontinence and dryness.

Haidar said he added the new services because his daughters and wife indicated interest in them. Now, Haidar said, his office is the only one in about 30 miles to provide laser treatments to Pearl River County residents.

Adding laser-based treatments involved months of research by  Haidar that began back in May of 2017. Wilkins said the office had a soft opening of the addition back in Oct. 2018, and a grand opening in November.

But before she began using the lasers on patients, Wilkins said she underwent certification training, even though it’s not required in the state of Mississippi.

She will have to undergo continued training and testing every three years to maintain that certification, which she said makes her feel better about providing her patients with laser treatments, especially since some of the devices can cause blindness or even third degree burns if used incorrectly.

“I feel so much better by going through the training and taking the certification test,” Wilkins said.

Beginning later this month, the business will begin offering Kybella treatment, an FDA approved way to treat fat buildup under the chin. Wilkins said the treatment destroys fat cells in that area of the body and thereby reduces the appearance of a “double chin.”

In order to understand the pain involved in some of the treatments provided by Glow Medical Aesthetics, Wilkins undergoes them herself. That helps her suggest pain reduction medication prior to a treatment if it might involve a level of discomfort.

Glow Medical Aesthetics is open from 9 a.m. to 4 p.m. Monday through Friday.

Wilkins said she is willing to adjust her hours if a client needs a treatment at a later time during the day and she takes patients on the weekends by appointment.