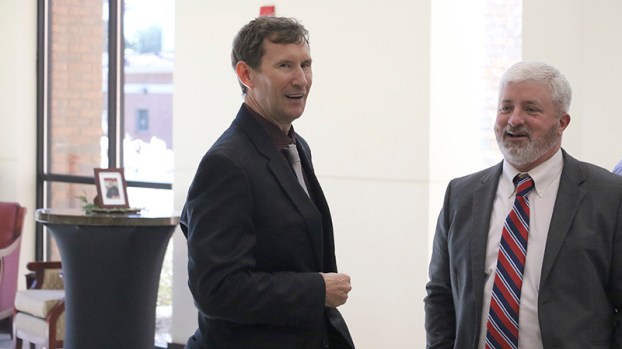 Alsobrooks to take over at EMCC

Alsobrooks is a graduate of Pearl River Community College, received a bachelor of science in industrial engineering from Mississippi State University, a masters in engineering technology from University of Southern Mississippi and a doctorate in philosophy in human capital development from USM, according to a story released by EMCC

He’s been serving as vice president at PRCC since 2011, but held previous positions at the local college through the years.

A farewell reception was held for Alsobrooks at the Ethel  Holden Brownstone Center for the Arts Thursday afternoon, where he said he will miss everyone he’s worked with at PRCC as he moves to EMCC. However, in his new capacity as president at EMCC, he will have the opportunity to continue to work with many staff and administrators at his alma mater as both colleges meet the challenge of filling gaps in the work force.

He said he is leaving a top community college to take the helm of another that is second to none.

“EMCC is at the top of the heap just like PRCC,” Alsobrooks said.

In his new position, he continue his work to help people reach their education and career goals, while helping them find gainful employment. His goal is to help the state fill the estimated 55,000 available jobs by providing people the skills they need to succeed.

Alsobrooks said that during his time at PRCC, some of his most memorable accomplishments include starting one of the best lineman classes in the state at PRCC, which was achieved in conjunction with Mississippi Power Company and Chain Electric Company. He also cited the establishment of a heavy equipment operator class with assistance from Huey Stockstill and HRL LLC as one accomplishment. A lot of those successes were completed under the leadership of former PRCC President Dr. William Lewis, Alsobrooks said.

PRCC President Dr. Adam Breerwood said that he will miss working with Alsobrooks, and he is certain he will do an excellent job in his new role. With Alsobrooks in the top position of EMCC, Breerwood feels certain that they can work together on larger platforms.

Breerwood said a replacement for Alsobrooks will be unnecessary as PRCC continues to consolidate services to provide cost savings that allow for additional services.

The possibility of the Pearl River County Board of Supervisors forming a unified garbage collection system was discussed this week.... read more