Victim of Jerry Glenn Willis thanks those who saved her life 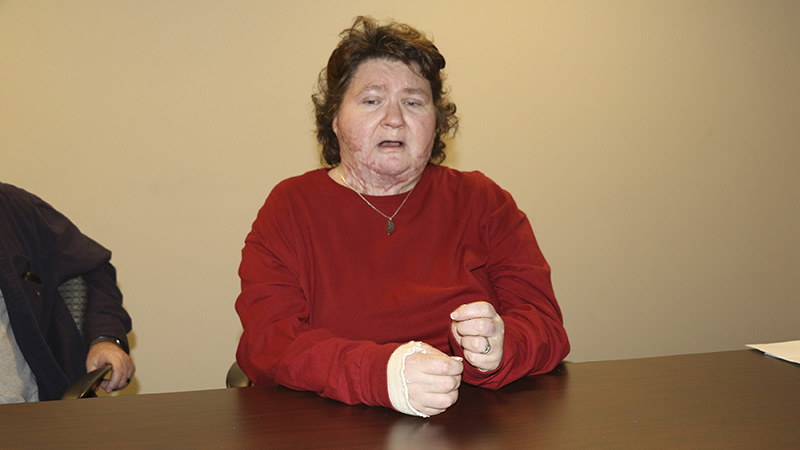 STRONGER EVERY DAY: Stacey Frank was viciously burned by her ex-boyfriend before being left on the side of Highway 11 more than a year ago. Today she thanks every person involved in her rescue, and the capture and sentencing of her attacker. Photo by Jeremy Pittari

It’s been more than a year since Pearl River County resident Stacey Frank was kidnapped, tricked into exiting her own vehicle on Highway 11 and set on fire by her ex-boyfriend before being left for dead.

But today, she says she’s getting stronger with each passing day, and it’s all thanks to the many people who helped her in her most desperate time of need.

Frank said that the incident that occurred on Nov. 8, 2017 most likely began due to her intention to get then 42-year-old Jerry Glenn Willis out of her home and out of her life. She planned to file a restraining order against him and have him evicted from her home. But he came home and found the paperwork before she got a chance to file that order with local law enforcement.

When he asked to go to a pawn shop to sell some things so he could have money to move out of her home, Frank said she gave him some stuff and went with him.

On the way home from the pawn shop, she knew something was awry because he kept taking wrong turns on back roads, at times coming to the end of two dead end roads before asking her to get out of the vehicle. Both times she refused.

“Had I done that, I wouldn’t be here today,” Frank said.

Finally, he claimed to be suffering from a headache and pulled to the side of Highway 11, asking her to drive.

Since it was along a busy highway, and because she felt that if she was driving she could finally get home to her son, she agreed. But as soon as she exited the vehicle and headed for the driver’s side, Willis attacked her.

“All I could see was an orange ball come at me,” Frank said.

Her right arm suffered the brunt of the gasoline-fueled blaze, and for a time she was told by medical personnel that she might lose it. In all, she suffered third degree burns to 40 percent of her body.

Her survival is no doubt due to the quick actions of several people. Previous coverage states that Frank was seen by passersby, running down Highway 11, suffering from severe burns and only partially clothed.

“I was just praying to God to let me live, and he did,” Frank said.

Fortunately for Frank, local law enforcement officer Kristy Boyd was a short distance away working an accident on Old Highway 26. Boyd heard the call and due to her quick actions Frank was picked up by Boyd and taken to Pearl River County Hospital and Nursing Home where she was treated quickly.

In addition to feeling a great deal of appreciation for Boyd’s assistance, Frank said she would also like to thank the three Pearl River County Hospital nurses who rode in the ambulance with her to provide vital CPR on the way to Jackson.

Though, she doesn’t know their names.

“I just want to say thank you to everyone who came to my rescue,” Frank said.

To date, she’s undergone 14 surgeries to repair the damage the fire caused to her body, which includes surgery to her trachea. The surgeries included multiple skin grafts. And there’s a long road ahead. Frank said she’s been told that there are about two years worth of additional surgeries still planned.

Frank said she would also like to thank everyone who was involved in Willis’ capture and his guilty plea that ultimately resulted in him being sentenced to two life sentences and five years without the possibility of parole or early release.

That includes Clay Cranford with the 15th District Attorney’s office, and everyone at the Pearl River County Sheriff’s Department, Poplarville Police Department and the Mississippi Bureau of Investigations for their part in her rescue and Willis’ capture.

Willis was captured two days after the attack on Frank in Monroe County, Ark., while attempting to burn the vehicle he stole from Frank.