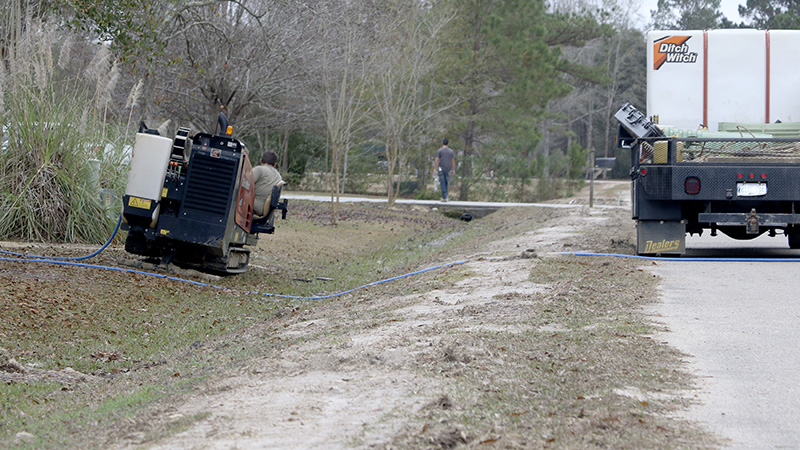 TEMPORARY DIRT PATCHES: The sides of roads within Wildwood Subdivision are currently patches of dirt as a result of ongoing work to install sewer lines in order to connect the homes to the city of Picayune’s wastewater system. Photo by Jeremy Pittari

A matter concerning a $20,000 charge to connect a new business to sewer services was discussed by the Pearl River County Utility Authority’s Board of Directors during a meeting held on Dec. 17.

Executive Director Cliff Diamond said that the man who wants to open a barbecue business in Poplarville, Tom Odom, addressed the Board to see if there was a way to minimize the cost to connect to Poplarville’s wastewater system.

Previous coverage states that Odom addressed the Poplarville Board of Aldermen about an alleged $20,000 fee associated with connecting his proposed barbecue business to the city’s system, which is planned to be located on Industrial Drive near an auto parts store. Members of the Board of Aldermen referred Odom to the Utility Authority since it owns the wastewater system.

Diamond clarified the matter, saying that the fee includes a $10,000 sewer line extension on the Utility Authority’s part and an additional expense of close to $10,000 for the installation of a grinder pump along with tap fees.

Due to the expense, Utility Authority staff and Odom are researching an alternative method that may involve running a line across a neighboring property at a reduced expense.

The Board also approved a motion to grant a resident living on Audubon Drive in Picayune a $900 payment to help cover damage to his home associated with a sewage backup.

Diamond said that the Board granted the payment because there was enough evidence to assume that a portion of the responsibility for the backup was the Utility Authority’s. Diamond said that adjustments to the grinder pump in that area have been made to ensure a situation of that nature does not occur again.

During that meeting, the Board discussed issues at a wastewater lagoon in the Wildwood Subdivision.

Diamond said that the staff members have been dealing with a seepage issue on the south embankment of the lagoon, but it has recently subsided.

To ensure the problem does not arise again, the Board approved a motion to move forward with purchasing wetland mitigation credits so the lagoon can be expanded, which will also make it easier for staff to maintain, Diamond said.

Work to construct a sewer system in the Eagle Heights subdivision off of Otis Stewart Road is a bit behind schedule, but Diamond said that the project is expected to be complete by next month.

In other business, updated reports from the Mississippi Department of Transportation have caused the work to relocate utilities in preparation for the widening of Highway 11 to slow. Diamond said that the work has been put on hold until the matter is clarified to ensure the utilities do not have to be moved more than once.

The next meeting of the Board will be Jan. 17, 2019 at 5 p.m. in the boardroom at the Neal Road facility in Picayune.