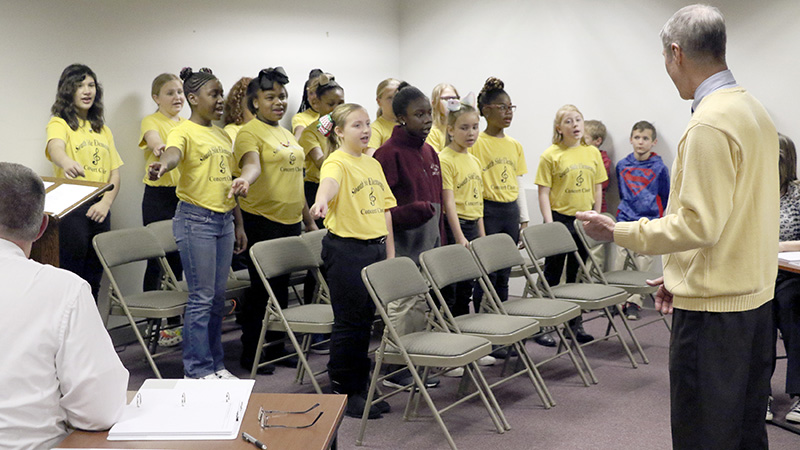 Members of South Side Upper Elementary’s choir performed for the Picayune School District’s Board of Trustees during Tuesday’s meeting. Photo by Jeremy Pittari

Members of the Picayune School District’s Board of Trustees were treated to a sample of a choral concert that will be offered to the public soon.

Dr. Earl Fox, a teacher at South Side Upper Elementary, said that the children in the choir, comprised of students attending the fifth and six grades, had to try out for a spot.

He brought them to the Board meeting so its members could hear how the children are advancing. The children performed two selections for the Board at the start of Tuesday’s meeting.

Fox also said that two members in the choir, Bella Frosch and Aston Smith, were selected for this year’s Mississippi Elementary Honor Choir.

The Board also approved a motion to accept a worker’s compensation quote, which has increased due to a number of claims. Stewart Sneed and Hewes Account Executive Justin Ladner said that he’s currently working to settle outstanding claims so the District’s rates can decrease.

During 2017, about $500,000 in claims were submitted, but that number has decreased this year to $113,000.  Board President Frank Ford asked if there was a frequency issue in workman’s compensation claims. Ladner said there is no issue with frequency, however, there have been claims associated with slip and trips due to rain, ice or a concrete barrier. Claims were also submitted by employees when they hurt themselves while doing routine tasks like painting or moving heavy items. Ladner feels confident that when those claims are settled he will be able to provide the District with a lower premium on coverage.

District wide, there is now a school resource officer at every campus. Maj. Chad Dorn with the Picayune Police Department informed the Board that officers are now stationed at each campus. Orders were placed for police cruisers for each officer back in August, but have not been delivered yet. Dorn said it’s unknown when the vehicles will arrive.

Harrell said that means the officers are now officially trained.