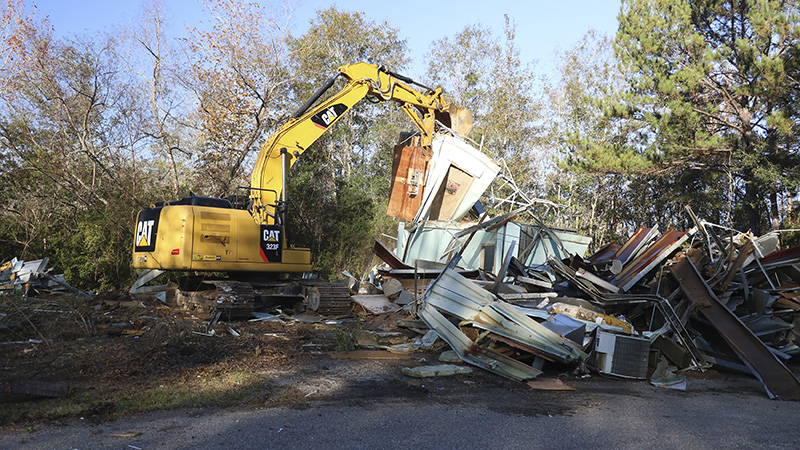 An old building that has sat empty for years was torn down Monday morning to make way for a new fire station in the city of Picayune. Photo by Jeremy Pittari

Monday morning an old building at the end of Goodyear Boulevard was torn down to make way for a new fire station in the city of Picayune.

The demolition began at about 8 a.m. that day, and took only about 20 minutes to bring the entire metal structure down to its foundation.

The old building used to be the location of Pearl River Valley Opportunity, but has been dormant for years. A recent decision by the City Council to move forward with a plan to relocate firefighters working out of an aging building on Palestine Road led to demolition on Monday.

Fire Chief Keith Brown said that any recyclable metals reclaimed from the demolition will be sold to help pay for construction of the new fire station, which will construct a 4,402-square-foot facility that will provide the firefighters working on that side of town with a truck bay, space for up to four firefighters per shift and all the amenities including kitchen and dining area.

During this month’s Council meeting, a majority of Councilors in attendance approved a motion to accept a bid from Dennis Collier Construction LLC of $508,309 to construct the new station. Councilor Larry Brleand opposed due to the owner of the company, Dennis Collier, being on the city’s Planning Commission.

Brown said that he expects construction of the new facility to begin sometime in the middle of next month.

The current station on Palestine Road sits on 16th Section land, essentially making it property of the Picayune School District. Assistant Superintendent Brent Harrell said plans for the building after the fire department moves out have yet to be established.