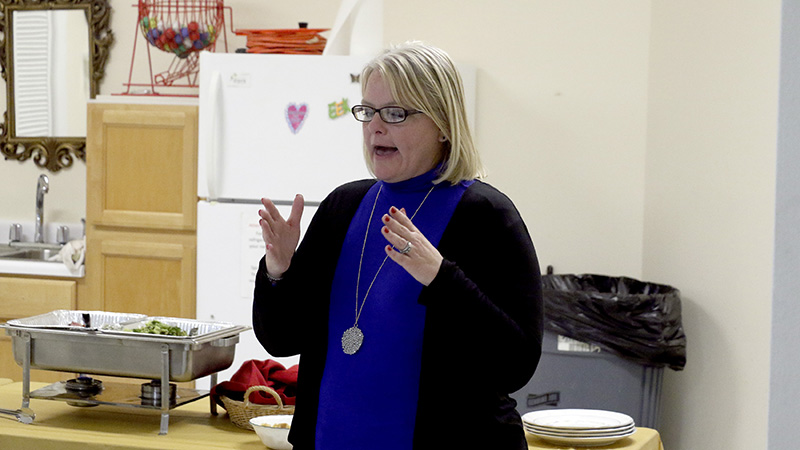 Tenth Chancery Court Judge Rhea Sheldon addresses members of the Exchange Club of Picayune about the successes Family First in Pearl River County has had so far. Photo by Jeremy Pittari

Of the five counties that were chosen to pilot a new program to help keep families together, Pearl River County was the first to get its Family First running and the first to provide assistance to those in need.

County and Youth Court Judge Richelle Lumpkin said the other four counties, Lee, Jackson, Lauderdale and Bolin are still in the planning stage.

Lumpkin said that the Family First Initiative is not to be confused with another organization operating under the Families First of Mississippi name, which has been in existence for a number of years.

Family First Initiative started this year with the intention of keeping families together and preventing children from entering foster care due to poverty. Lumpkin said that cases that involve abuse are not covered under this initiative.

An example of a qualifying scenario was when a local home was damaged during the most recent severe storm that passed through the county. After that storm, a home occupied by a retired veteran and his children lost power due to a downed power pole. With no money to have the pole and associated equipment repaired, Family First in Pearl River County was able to find a willing electrician and other volunteers to provide the necessary parts and service to restore power to the home, and a month’s worth of free electricity from the power company.

Of the children placed in foster care in Mississippi, 57 percent were placed there due to poverty, not abuse or neglect, Lumpkin said. And poverty is a problem for a number of families here in Pearl River County.

Lumpkin said that federal money was sent to each state within the United States to establish this program, and it’s only enough money to pay a coordinator and establish a database that will compile information about services available in the county that can help meet temporary shortfalls in a family’s needs to prevent children from being placed in foster care.

10th Chancery Court Judge Rhea Sheldon said that the program is not meant to become a regular source of help for a family. Services can include referring a parent to job skills training, GED classes or assistance with child care while a parent receives training or attends GED classes.

“The aim is for them to be able to help themselves,” Lumpkin said.

“We don’t want them to be a repeat beneficiary,” Sheldon said.

Sheldon said that the newly found effort is continually looking for funding, donations or services.