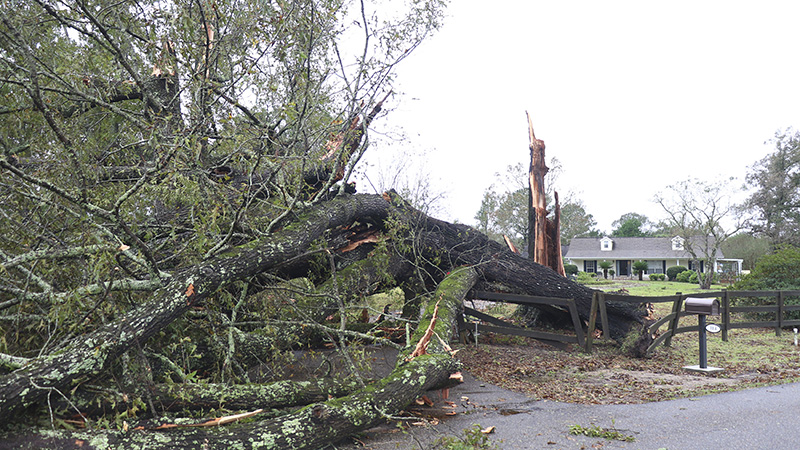 BLOCKED DRIVEWAY: This property along Highway 53 just outside of Poplarville lost several large oak trees during Thursday morning’s storm. The trees fell across the driveway to the home, damaging the fence. Photo by Jeremy Pittari

Trees fell across Pearl River County during a storm that passed through the area early Thursday morning.

A number of those trees fell across the northbound lane of Interstate 59. Pearl River County Emergency Management Director Danny Manley said the downed trees blocked the interstate for some time until they were cleared. One vehicle was reported to have been damaged while traveling down the interstate after being struck by a tree as it fell, Manley said. The occupants did not report any major injuries.

A number of trees were also downed along Highway 53 near Dupont Hart’s Chapel, and some residents reported minor damage to their houses in the area of Steephollow Road, Manley said.

Fortunately, no one reported being injured or displaced as a result of the damage.

Manley said that the wind gusts during the storm were estimated to have reached 70 to 80 miles per hour.

Skip Rigney, a local retired meteorologist, said the damage in Pearl River County was part of a large squall line that extended as far north as Tennessee and as far south as the Gulf of Mexico.

Its development began at about midnight Thursday ahead of a cool front. A low-pressure system near Arkansas caused the storms to intensify, Rigney said.

“The squall line raced quickly ahead of the cool front and hit our area around 5:00 a.m. The National Weather Service in Slidell issued three tornado warnings and four severe thunderstorm warnings for various parts of our county as the line moved through. The storms were a reminder that November through December is one of the two most active severe weather seasons in south Mississippi with the other being in the spring,” Rigney said in a written statement.