Picayune smashes Natchez in a decisive first round win 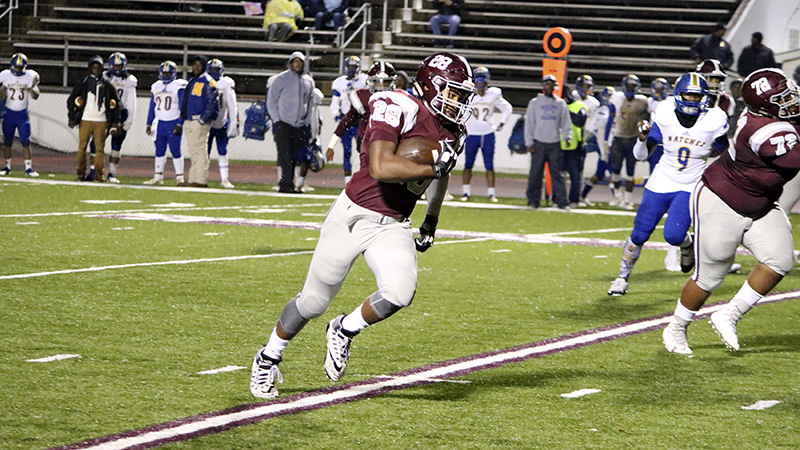 SCORING PLAY: Kaleb Hart finds an opening in what would be a touchdown for the Maroon Tide Friday night. Photo by Jeremy Pittari

In what was almost a shutout win for Picayune’s Maroon Tide, the Natchez Bulldogs were able to put points on the board in the final quarter, but still lost 55-8 in the first round of the playoffs.

Time after time, the Tide defense squashed any hopes of the Bulldogs crossing into pay dirt. But most of all, the Tide’s offense was just as effective, scoring on just about every possession during Friday’s matchup.

That scoring started in the Tide’s first possession of the game through a five play drive that started at the Bulldog’s 43 yard-line. It culminated in a touchdown run by Kaleb Hart from the 21 yard-line. Isaac Brice’s successful point after touchdown gave the Tide an early 7-0 lead with 9:43 left to play in the first quarter.

After the Bulldogs turned the ball over on downs, four plays later the Tide would widen that lead in an 85-yard drive that ended with Jortin Raine rushing from the 42 for his first touchdown of the night. Brice’s PAT was slightly off target, bouncing off the left goalpost and leaving the score at 13-0 with 7:10 left in the first.

Natchez would hold on to the ball for 11 plays, but eventually give it back to the Tide when a pass by Paul Hargrave fell short of the target on fourth and 19. Tide offensive players took control of the ball at their own 29, and pushed it down field in a 71-yard drive that ended with a Hart touchdown run from the Bulldog 21. Brice’s PAT was on target, giving the Tide a 20-0 lead with 11:53 left to play in the first half.

Fourteen plays by the Bulldogs failed to provide points on the visitor’s side of the scoreboard, giving it back to the Tide at their own 23. Six plays that included a huge run by Raine from the Bulldog 45 to the 1 yard-line, would end when Raine crossed the end zone on the next play to add points to the home team’s side of the scoreboard. Brice’s PAT widened the Tide’s lead to 27-0 with 5:31 left before halftime.

After the Bulldogs gave the ball up on downs in just four plays, a 55 yard drive by the Tide through 9 plays set the team up at the three yard-line, giving Raine an opportunity to add another touchdown to the team’s score. Brice’s PAT soared through the uprights with just 24 seconds left before the half, giving the home team a 34-0 lead.

In the third quarter, possession of the ball started with Natchez, and would change hands three times before the Tide capitalized on a four play drive starting at the team’s own 36, ending with a one yard run by Jakail Myers with 4:31 left in the quarter. Brice completed the PAT, giving the team a 41-0 lead.

After the Bulldogs gave the ball up on downs, two plays later a double handoff by the Tide would end with Dylan Schabault running from the Natchez 44 for a touchdown with 2:58 left in the third. Brice’s PAT brought the score to 48-0.

The 0 on the visitor’s side of the board would change in the first few seconds of the fourth quarter, when Cornelius Bailey caught an 11-yard pass to reach pay dirt. A successful two-point conversion attempt by Javontae Davis with 11:18 left in the fourth put the score at 41-8.

The final scoring play occurred with just 4:23 left in the game, when the team drove the ball from their own 22 in 12 plays that ended with Isaac Hickman completing a pass to Jaylen Hart for a touchdown. Brice’s PAT put the final score at 55-8.

Head Coach Dodd Lee was proud of his team’s performance Friday night, but did notice a lack of enthusiasm after halftime.

“We did a lot of good things. I didn’t think we tackled very well in the third quarter. We tackle like that, we won’t be in this thing long. We’re going to have to tackle better,” Lee said.

In preparation of next week’s matchup, he has some things he would like to focus on.

Hornets move to third round of playoffs