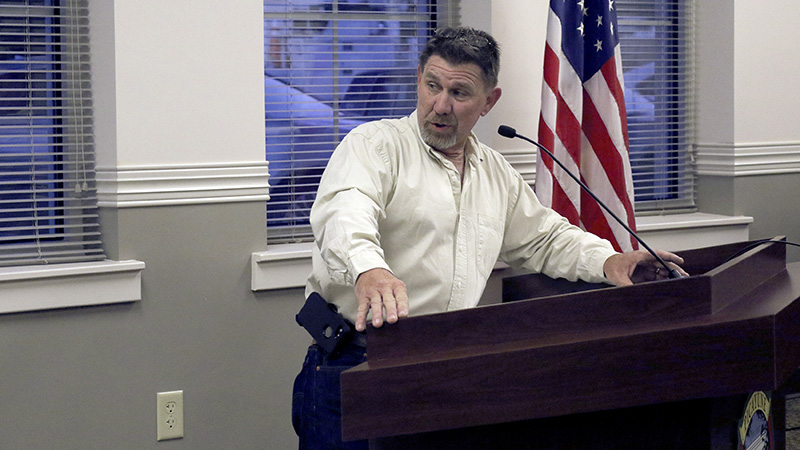 KEEPING IT GREEN: City of Picayune Public Works Director Eric Morris addresses the crowd during Tuesday’s City Council meeting concerning an award the city won for implementation of flower beds in a beautification effort throughout the city. Photo by Jeremy Pittari

Picayune’s Public Works Department was recognized by the City Council during Tuesday’s meeting for receiving the Scenic Community of Mississippi award from the Mississippi Urban Forestry Council.

The award commemorates a city that “maintains a healthy green infrastructure,” a release from the agency states.

According to a statement in the release, the city of Picayune continues to demonstrate their care and appreciation of community trees and landscapes attracting both visitors and commerce to the city. Picayune has implemented some of the best landscape practices, models and policy than most communities.”

Public Works Director Eric Morris said that part of the reason the city received the award was for implementation of greenhouses used to grow the flowers and plants used in public flower beds.

Also during Tuesday’s meeting, the Council approved a motion to accept the donation of a 6×21 feet utility trailer from Keep Mississippi Beautiful, which Grants Administrator Christy Goss said will be used to pick up litter in the city. The first such event will be held on Nov. 29 at 2 p.m. She invited the public to participate in the 20-minute cleanup effort to see how much litter can be picked up in that time. The cleanup will start at the clock at the intersection of West Canal Street and Main Street.

In other business, the Council:

— Approved a motion to apply for AIP Entitlement Funds. Jonathan Hickman with Dungan Engineering said that if the application is approved, it could be worth up to $150,000 worth of funding that can provide cleanup services at the Municipal Airport. The grant would provide 90 percent of the funding, and require a five percent match each from the city and state.

Vehicles stolen from Poplarville business, one suspect at large