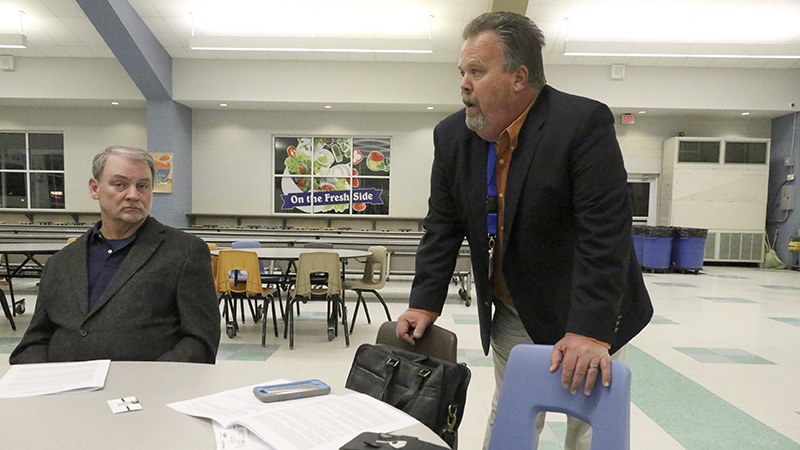 The issue of out-of-state tags has been an ongoing issue within Pearl River County, prompting a meeting of local officials Tuesday evening to gather information from the Mississippi Department of Revenue.

Immediately after Hurricane Katrina, the influx of residents from surrounding areas meant that a variety of car tags could be seen traveling along Pearl River County Roads. It was a problem before that historic storm, and 13 years later that problem persists.

Pearl River County Tax Assessor Gary Beech said there have been numerous complaints from residents and school officials about the issue.

The complaints entail children being dropped off at local schools in vehicles displaying tags from other counties and states, Beech said. Now that voters have approved a bond issue for the Pearl River County School District to fund the construction of more facilities, to the tune of $18.5 million, it’s essential that everyone living in the District pay their fair share.

Tony Lawler, the Director of the Office of Property Tax for the Mississippi Department of Revenue, said that problem is not unique to Pearl River County. Lawler said the price of a car tag can vary wildly in Mississippi depending on the county. As an example, he said a car valued at $25,000 for tax purposes could incur a tag costing between $200 to $1,200, depending on the county. According to Lawler, Hinds County has the most expensive car tags.

Due to that fluctuation, Lawler said it’s evident there is a motive behind purchasing a tag from another county or state with cheaper tax rates. However, if everyone who lives within a particular county purchases the proper tag, then millage rates, and subsequently car tag fees, will decline.

Not purchasing the proper tag can have negative consequences other than a ticket if the owner is caught by law enforcement during a traffic stop. Anyone who has filed for homestead exemption and is caught with an out-of-state tag could have that tax exemption rescinded, Beech and Lawler said.

Lawler said the state switched to a new computer system last year that could make that process even easier for tax office employees, including within Pearl River County. Law enforcement officers also have access to the web-based system, allowing them to enforce the law with ease.

Capt. Joe Quave with the Pearl River County Sheriff’s Department said that residents in the county can assist with enforcement by reporting neighbors who have out-of-state tags.

Deputies will use that information to form a case and go from there, but it takes time.

Beech said there is no concrete plan at this point to enforce the law, but Tuesday’s meeting was to inform county leaders of the law and see what can be done to enforce it.

County residents are upset that some residents are getting away without paying their fair share. Pearl River County resident Lisa Dean Owens called the Picayune Item on Wednesday to report that during Tuesday’s election she saw a woman vote at a county precinct within Picayune, after getting out of a GMC Denali that had a Louisiana tag. The Denali line on GMC vehicles refers to the company’s luxury line of trucks and pickups. After the woman exited her luxury vehicle, she proceeded to vote in Tuesday’s election, Owens said. State law says that a voter must present a form of identification that proves their residency in the state before voting.

“I think it’s about time something gets done about this,” Owens said.