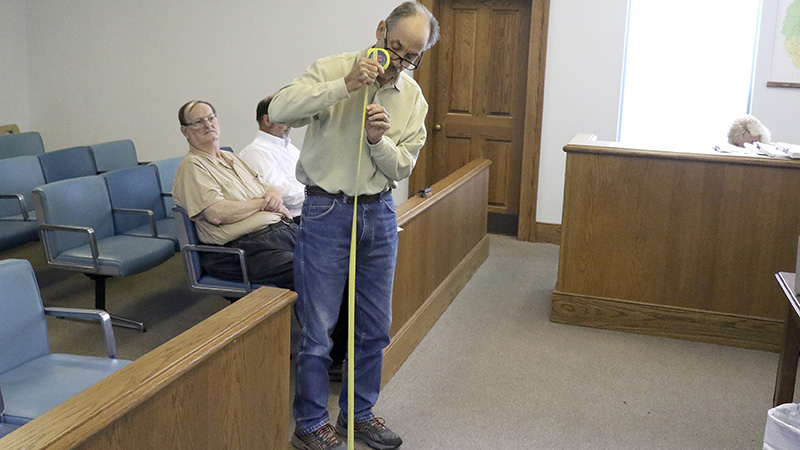 BIG OBSTACLES: Tom Lehr uses a tape measure to show the height of a new wall that was built at the public dumpsters at Central Landfill. He said the wall makes it difficult to dump refuse at the facility. Photo by Jeremy Pittari

Pearl River County’s Board of Supervisors approved hiring a county employee to a new position to help volunteer fire departments with their paperwork.

The matter was tabled at the last meeting because Board Vice President Hudson Holliday wanted to speak with the chiefs of each department at a meeting. At that meeting, Holliday said he felt the concerns of each chief had been addressed, and now felt comfortable hiring the new employee.

The primary responsibility of the new employee, whose name is Shawn Wise, will be to complete the mundane paperwork each department is mandated to fill out.

During Monday’s meeting, the Board also discussed moving purchases to Manley’s office so they will become part of the Board’s regular docket.

No changes would be made to each department’s funding, and there would still be separate accounts for taxes collected on the part of the county and fire insurance rebate funds. Manley said that change will remain voluntary, but could lead to a streamlining of routine paperwork.

“My goal is to get you out of the money business and back to fighting fires,” Manley said.

Also during Monday’s meeting, a county resident, Tom Lehr, addressed the Board about changes at the county dump, otherwise known as Central Landfill.

Lehr said that the last time he went to the landfill in Millard, he noticed that a large wall had been built in front of the dumpsters that the public uses to dispose of waste. He said the wall is 54 inches high, and makes disposing of his waste much harder.

County Administrator Adrain Lumpkin said the wall was built recently because there had been two incidents of people falling into the dumpsters while attempting to dump trash in them.

On a semi-related note, Lehr also asked about the possibility of starting up a countywide trash collection service. He noted that a state law mandates that counties establish such a service, either paid for annually with their taxes, or billed monthly to each resident. Lumpkin said that research on that topic was conducted several years ago, but ultimately the Board came to the conclusion that it would put the local haulers out of business, and create a headache for the county, since it would require the purchase of about 6 garbage trucks at $150,000 a piece, and the hiring of additional staff to man the trucks.

Lehr’s research showed that residents in Hancock County pay $30 per quarter for such a service.

Lumpkin said that some counties have to charge an additional seven mills in taxes to cover the cost of a countywide collection system, and Waste Management, the company that operates Central Landfill, allows county residents to drop off four 50 gallon garbage bags per week for free. Holliday countered that the expense of gas and time does not make that perk free.

Ultimately no action was taken on that discussion.