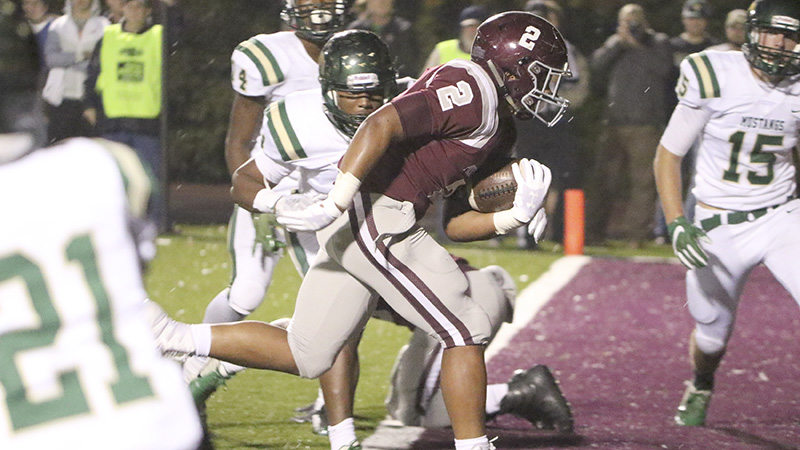 A close game between the West Jones Mustangs and the Picayune Maroon Tide resulted in a 21-13 win by the Mustangs, effectively knocking the Maroon Tide from the State Championship game next week and punching the Mustang’s ticket to try for a state title.

The game started strong for the Tide, with an initial kickoff return by Cameron Thomas that put the Maroon Tide starting its first drive of the game from the West Jones’ 38. Eight plays later the team was at fourth and goal at the three, opting for the field goal. But, Isaac Brice’s attempt fell wide, giving the Mustangs the ball at its own 20.

Three plays later, the visiting team drove the ball down the field to the Tide’s 30. In the subsequent play, Mustang quarterback Alan Follis was forced out of the pocket and grabbed by a Picayune defender in a move that looked like a sack, but when his knees didn’t touch the ground, Follis continued to run the ball for a touchdown untouched. With 6:39 left to play in the first quarter, the Mustangs held a 7-0 lead with Walker Thompson’s successful point after touchdown attempt.

“We got some terrible breaks in the first half, but that’s part of the game,” said Head Coach Dodd Lee.

After the Tide turned the ball over on downs, the Mustangs drove the ball from its own 47 through 12 plays that ended with running back Kentrell Pruitt crossing the end zone from the Tide’s two-yard line. Thompson connected again on the PAT with 11:54 left in the first half, giving the visiting team a 14-0 lead.

After turning the ball back over to the Mustangs on downs, the Maroon Tide reclaimed possession of it when a pass by Follis intended for wide receiver Tajrick Randolph was picked off by Curdevone Jackson for the home team.

Through a nine-play drive that began at the Mustang’s 37, the Tide put points on the board when running back Jortin Rain crossed into pay dirt from the three yard line. Brice’s successful PAT put the score at 14-7, with 3:51 left in the second quarter.

After coming back from halftime, the Tide put another touchdown on the board through an 80 yard drive for four plays that began at their own 20 that was capped off with a halfback option play from Raine to tailback Kaleb Hart from the West Jones’ 28 yard line. With 3:38 left in the third quarter, Brice’s PAT attempt bounced off the uprights, leaving the Tide one point behind the Mustangs at 14-13.

The final score of the game came on the Mustang’s next possession, and was the culmination of seven plays that began at the Tide’s 34 yard line, ending with a three-yard run by Pruitt to pay dirt. With 1:15 left in the third, Thompson’s successful PAT gave the Mustangs a 21-13 lead that the team would hold through the fourth quarter until the final buzzer rang.

With the season at an end, Lee said, “We did some good things, we just didn’t do enough of them.”

West Jones will face West Point for the state title.

Poplarville punched ticket for another shot at state title