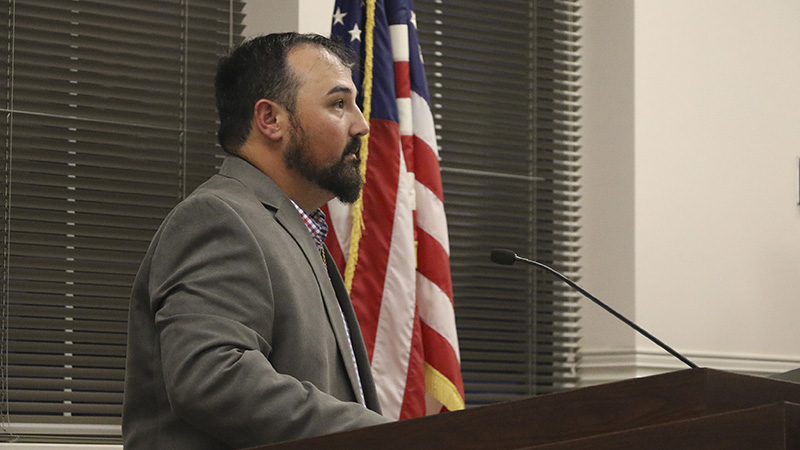 DONATION: Parks and Recreation Director Trevor Adam discusses a donation from a local business to be used for renovations to Friendship Park during Tuesday’s Picayune City Council meeting. Photo by Jeremy Pittari

During Tuesday’s Picayune City Council meeting, concern over the current state of the Picayune Police Department’s building was brought up by the city’s leaders.

Councilor Larry Breland began the conversation with his assessment of a recent tour he and Councilor Lynn Bogan Bumpers took of the facility. In short, Breland used the word “pathetic,” in his description of the current status of the building and said “something needs to be done as soon as possible.”

Bumpers mirrored his comments, saying that the building is depressing and the conditions prisoners are kept in are less than ideal.

Breland made a motion to amend Tuesday’s agenda to ask City Manager Jim Luke to seek a funding source to remedy the situation, with the caveat that the fix does not involve repairs to the existing building.

Councilor Tammy Valente also asked about recent reports that the facility’s roof is still leaking, even after more than $250,000 worth of roof repairs were recently completed.

Police Chief Bryan Dawsey confirmed that the roof is leaking in spite of the repairs, but only when it rains, ruling out the air conditioning unit as a cause. Dawsey added that discussions are underway with the contractor to have the situation remedied.

Jonathan Hickman with Dungan Engineering added that the problem is being disputed by the contractor, since the leak appears to be coming from small holes in an old HVAC unit that was reused during the roof repairs.

Also during Tuesday’s meeting, it was announced that the Parks and Recreation department received two awards from the Mississippi Recreation and Parks Association.

The awards were the Bo Phillips Design Award of Merit for Crosby Commons and the Therapeutic Programming Award of Merit for the Buddy Ball program. Several organizations, city employees and volunteers were recognized for their contribution in the establishment of the Buddy Ball program, including Kiwanis of Picayune, local police officers and firefighters who donated their time to participate in the program, and Parks and Recreation Director Trevor Adam.

Adam said he would like to thank Corey Dorn, who was the co-founder of the program and was essential in its formation.  Adam said the program began with 60 participants and over the past three years has grown to 100 children and adults.

Community participation in the program was a positive representation of the residents in Pearl River County, Adam said.

“It’s been an all out community effort,” Adam said.

In other business, the Council approved a motion to sell a parcel of land to the Mississippi Department of Transportation. Code Enforcement Officer Tom Milar said the 2.5 acres is part of the city’s 35-acre plot of land for the cemetery near Eighth Street. The land that was sold is in the path of the ongoing Highway 11 widening project, and can’t be developed due to being in a flood zone.

Another motion was approved to apply for a Keep America Beautiful grant that will provide 100 litter stands for cigarette butts. Grant Administrator Christy Goss said that even though the city is smoke free, there are a number of areas where adults smoke cigarettes. Breland added that even though the city parks are supposed to be smoke free, city employees still pick up a lot of cigarette butts.

Councilors also approved a motion to accept a $350 grant from Mossy of Picayune for use in Friendship Park renovation work.

Expansion work at the Municipal Airport may be funded 100 percent by the Federal Aviation Administration. During Tuesday’s meeting, the Council approved a motion to apply for an Airport Improvement Program grant. Hickman said there is a slim chance the city will be approved for the grant, especially since there’s only $6 to $7 million in funding available, and $7 billion in requests have already been submitted. But if the grant is approved it will pay 100 percent of the cost to widen the runway and add hangars to the facility.