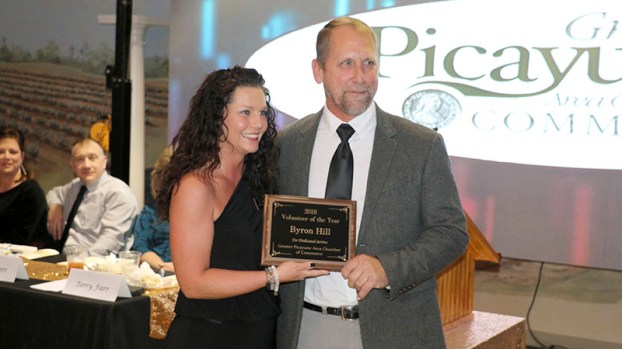 VOLUNTEER OF THE YEAR: Byron Hill, at right, was named this year’s Volunteer of the Year. He is pictured with incoming Chamber Board of Directors President Misty Toruno. Photo by Jeremy PIttari 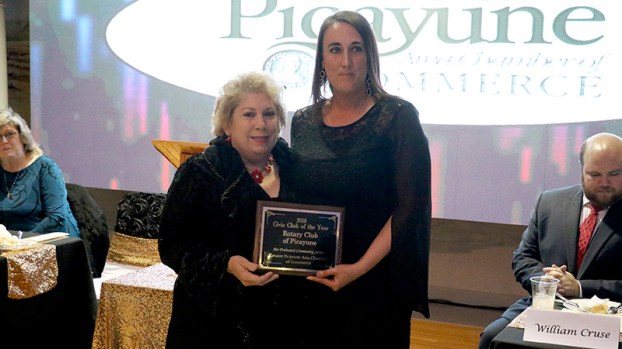 CIVIC CLUB OF THE YEAR: Rotary Club of Picayune was selected as Civic Club of the Year during Tuesday’s 70th Annual Awards Banquet held by the Greater Picayune Area Chamber of Commerce. From left is Rotary President Tana Cochran and Chamber Executive Assistant Laci Lee. Photo by Jeremy Pittari 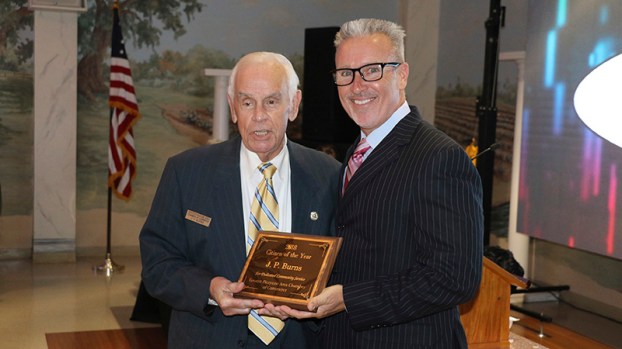 CITIZEN OF THE YEAR: J.P. Burns, at left, was presented with this year’s Greater Picayune Area Chamber of Commerce Citizen of the Year award at the 70th annual awards banquet. He is pictured with Picayune Mayor Ed Pinero. Photo by Jeremy Pittari 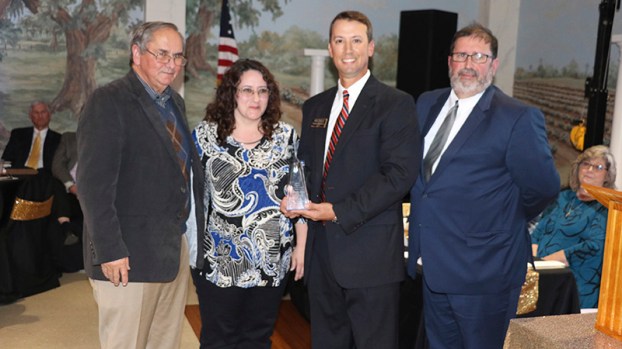 This year’s Club of the Year is Rotary Club of Picayune. Chamber Executive Assistant Laci Lee said the club was chosen as this year’s winner because of its dedication to service, including providing scholarships to local young people, holding the annual fishing rodeo, establishing a little free library and for the newly established Love Your Selfie event that helps young girls build self-esteem.

This year’s Volunteer of the Year is Byron Hill. Incoming Board of Directors President Misty Toruno, said that Hill was chosen because of his involvement with Puttin on the Pink, his work as a past president of the Chamber Board, his work as a member of the Rotary Club of Picayune, assistance with the Civic Women’s Club’s annual Christmas Parade and various accomplishments with Mississippi Power Company.

J.P. Burns was chosen as this year’s Citizen of the Year. Mayor Ed Pinero presented the award, saying that Burns is a graduate of Mississippi State University, had previously been employed with a number of companies, including Ford, General Electric and Textron in other parts of the country, before moving back to Picayune. Burns served in the National Guard for 41 years, has been a dedicated member of First Baptist Church of Picayune for 41 years, a member of Picayune Lions Club for 20 years, and currently serves as a poll worker during Pearl River County elections and election commissioner for elections held within the city of Picayune.

The Excellence in Business Award was presented to WRJW for its passion in helping schools, churches and the community.

After presentation of the awards, outgoing Board President William “Bill” Cruse, gave the attendees an update on how the Chamber is moving forward and overcoming obstacles. Cruse said that the biggest challenge the Board faced coming into the current year was establishing a balanced budget. But after hiring Executive Director Terry Farr, and establishing a goal of increasing membership, Cruse announced that the Board was able to not only balance the budget, but also increase membership by more than 60 through the year. He said that at the beginning of this year, there were 230 Chamber members, but as of Tuesday night that number was at 293.