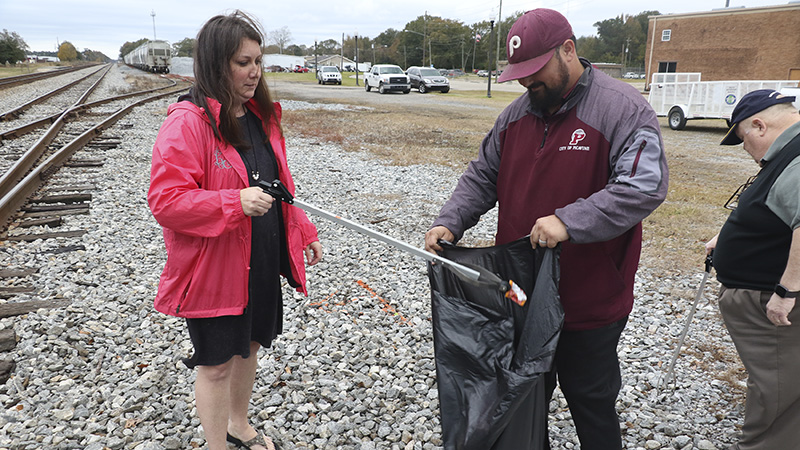 CLEANUP BREAK: From left, city employees Leann Smith and Trevor Adam do their part to pick up trash Thursday afternoon in the area of West Canal Street and Main Street. Photo by Jeremy Pittari

Thursday afternoon, a number of city employees and volunteers gathered at the intersection of West Canal Street and Main Street in Picayune to conduct a quick cleanup of the area.

The effort was part of the newly established Keep Picayune Beautiful Committee’s promise to keep the city clean.

Keep Picayune Beautiful Committee member Christy Goss said that the group plans to hold more of these small cleanup efforts in the future, in combination with larger efforts as part of Keep America Beautiful.

It was announced late in October that the city became an affiliate with Keep Mississippi Beautiful and Keep America Beautiful, making the city the 46 affiliate in the state, according to a release from Goss.

For about 20 minutes Thursday’s cleanup tasked the city employees and local volunteers with picking up any trash they could find in that area.

“It only takes a minute to make a lasting impression,” Goss said.

That recent cleanup effort was preparation for visitors from out-of-town who are expected to participate in next week’s Shop by Candlelight/Christmas on the Rails.

Goss said she plans to organize similar quick cleanup events in each district within the city with the help of City Council members.

Details about those cleanup efforts will be published in the Picayune Item and on the Keep Picayune Beautiful Facebook page.