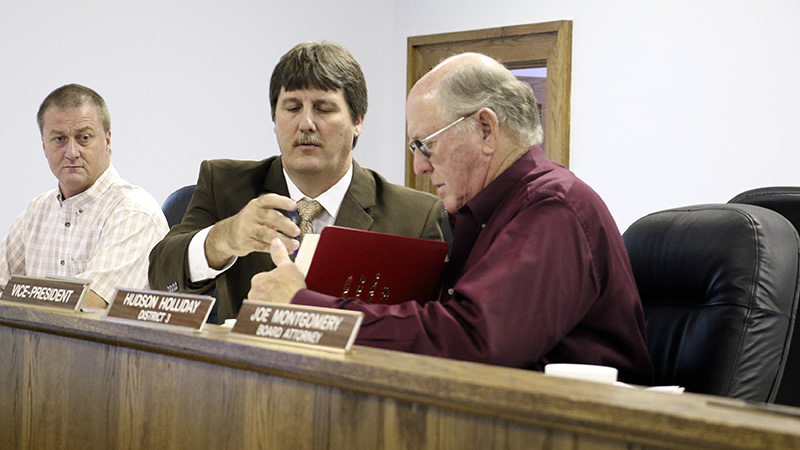 Members of the Pearl River County Board of Supervisors approved a motion to declare October as Domestic Violence Awareness Month, discussed a rate increase recently  implemented at the county landfill and hired a new employee as part of the Families First pilot program.

During Monday’s meeting, Rene Davis, community outreach coordinator for Gulf Coast Center for Non-violence, said that this year’s theme for the month is “#onething.” As a result, they are asking everyone in the community to do just one thing against domestic violence, whether that is to donate time or money to their nearest center, speak up when they see acts of domestic violence or support someone who is dealing with domestic violence. She said the Board just accomplished their one thing by approving the declaration.

“I appreciate that you all have done your one thing,” Davis said.

Board Vice President Hudson Holliday said he, like all fathers of daughters, appreciates everything the Center has done for the community.

Davis added that the center recently dropped the word “Women’s” from its name because they also provide assistance to men who have dealt with domestic violence.

In another matter, Holliday addressed a rate increase by Waste Management at the Central Landfill in Millard. As of Sept. 1 of this year, the rate per ton increased from $32.72 to $34.66, which includes a $1 solid waste tax. During discussion of the matter, the Board decided to table the matter until the Board attorney can review the county’s contract with Waste Management.

The Board also discussed hiring a county resource coordinator to man the local office of Families First. County Administrator Adrain Lumpkin said the organization has picked Pearl River County as one of six within the state of Mississippi to pilot the program. It is a federally funded program through the Family First Prevention Services Act, and aims to keep families together rather than putting children in foster care in instances of neglect that can be rectified easily. Lumpkin said this initiative will not deal with cases of abuse.

Since 82 percent of the cases where children are taken from their homes are due to neglect, this program will work to connect families with services that can rectify cases of abuse by ensuring families can keep power and/or running water to their home or prevent or rectify some other form of neglect such as a lack of food. Instances of abuse will still involve removing the child from the situation.

“This program will not keep kids in abusive situations,” Lumpkin said.

Pearl River County was picked as one of the pilot counties for the program due to its active youth court. Judge Richelle Lumpkin, the county’s County Court Judge and Youth Court Judge, will be on an advisory council. The Board approved a motion to accept a $50,000 grant to hire a county resource coordinator for the first year. After the first year, the Board will evaluate the value of the position and the program. The person in the new position will work under Judge Lumpkin.