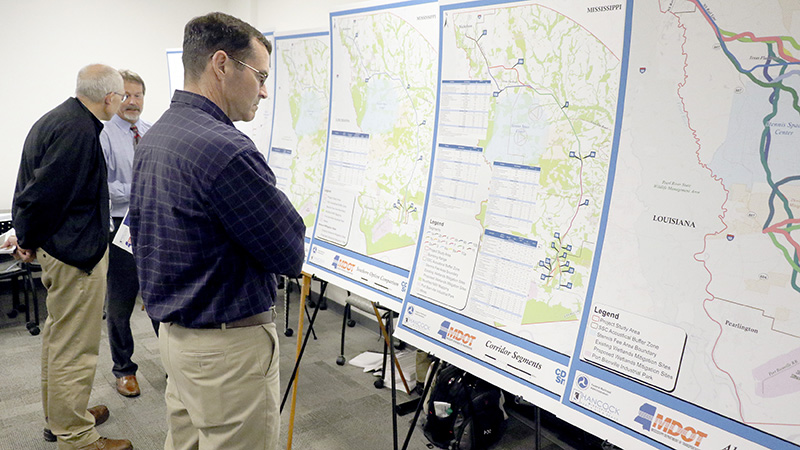 ON DISPLAY: Attendees of Tuesday’s public hearing held by the Mississippi Department of Transportation at the Stennis International Airport look at plans to build a connecting railroad from Hancock County to the Nicholson area through the buffer zone. Photo by Jeremy Pittari

Community members had a chance to receive updated information about the proposed construction of a rail line from Port Bienville Industrial Park in Hancock County to the Norfolk Southern rail line in Nicholson and provide comment during a public hearing held Tuesday near Stennis International Airport.

Adam Johnson, Mississippi Department of Transportation Location Engineer for the Environmental Division, said that the estimated price of the project decreased to $108 million in part due to the reduction of retaining walls where the proposed line would cross roadways.

If the project moves forward as expected using the preferred route, the rail will cross over Highway 90, Highway 607 and Interstate 10. An existing bridge over Interstate 59 would become part of the route. Overpasses will be built where the rail crosses over roadways other than Interstate 59.

The preferred route runs from the Port Bienville Industrial Park by connecting to an existing CSX rail line, building new line north toward Pearl River County around the Stennis Space Center fee boundary on the east side and connecting to the Norfolk Southern rail in Nicholson.

Several steps will still need to be completed before the project can move forward and begin seeking funding for design and construction, including the Environmental Impact Statement and the Record of Decision, Johnson said.

Johnson said that if all goes well, the project could feasibly move forward in three months, but he feels six months would be a more likely timeline. However, he said that he expected to hold Tuesday’s public hearing a year ago.

Funding to conduct the study to determine the best route was provided by the federal government.

The purpose of the project is to give the Port Bienville Industrial Park a north and south rail to go with the existing CSX line that runs east and west and therefore make it more attractive to businesses, Johnson said.

Comments about the project will continue to be accepted until Nov. 5 and can be submitted by fax 601-359-7355 or via email at environmentalcomments@mdot.ms.gov.