Professional development day was a hit 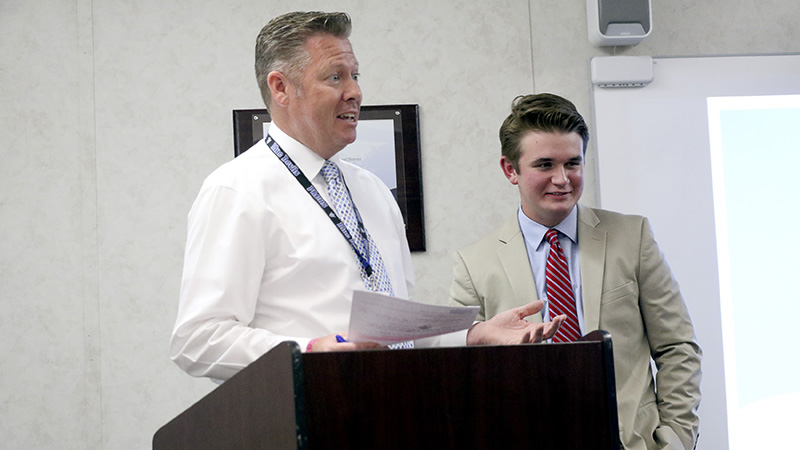 ADDRESSING THE BOARD: Alan Lumpkin, superintendent of the Pearl River County School District, speaks to the Board of Trustees during Thursday’s meeting. He is joined by Student Body Representative Gage McClinton. By Jeremy Pittari

Members of Pearl River County School District’s Board of Trustees heard updates from the District’s student body representative and discussed improvement projects going out for bid as part of the bond referendum during Thursday’s meeting.

Gage McClinton, the newly elected student body representative, said the recent professional development day was a hit with the District’s high school students. Superintendent Alan Lumpkin said the event featured 65 topics and included information about how to apply for college loans and financial aid, Dr. Adam Breerwood of Pearl River Community College spoke about what it’s like to live on campus, a speech from State Representative Stacey Wilkes, and students even got a chance to learn about proper maintenance of a vehicle.

In other business, the Board approved a motion to advertise for bids for two projects as part of the recently approved bond referendum.

The bond, which was approved by voters within the District earlier this year, will involve $18 million worth of improvements and construction at the School District’s two campuses.

Two bids are being sought, one for work primarily at the Carriere campus and another for work at the McNeill campus.

At the Carriere campus, the work will include a new building that will house classrooms for the middle school and the library, a building for more high school classrooms, storm drainage at the McNeill campus, overlay of the student parking lot along with additional parking space and renovation of the ramp at building K to make it more ADA compliant. There will also be a covered sidewalk to connect buildings M and L.

Three alternates are included in that project, including new facades, additional concrete sidewalks and canopies and interior storm drainage between the gym and classroom building.

At the McNeill campus, the bid will include work to build 29 new classrooms, renovation of building F to convert it to a media center, an addition to the cafeteria and an addition to the administration building, improvements to the bus lane and making room for up to 30 buses, adding 24 more spaces to the teacher parking area, creating 45 parking spaces for the central office, adding security features to public entrances and adding access control features to the perimeter doors at the Lower Elementary. Bids are currently being accepted, and will be reviewed by the Board on Nov. 29 of this year.