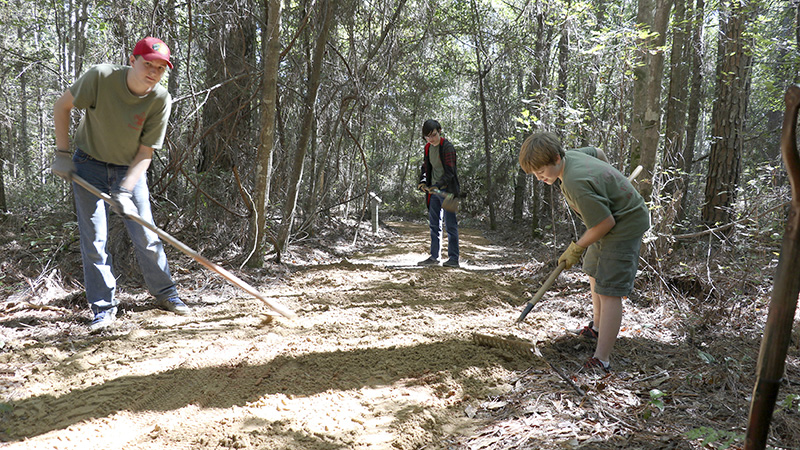 COMMUNITY SERVICE: Bleu Wilkinson-Jenkins, at left, spent his weekend with fellow Scouts with Troop 28 out of Poplarville Peter Anthony, center, and Hunter Heatherly. They spent the weekend spreading dirt and pea gravel along the Woodland Trail to make it safer for visitors. Photo by Jeremy Pittari

A prospective Eagle Scout donated his weekend to help fix trails within the Crosby Arboretum over the weekend.

Saturday morning, Bleu Wilkinson-Jenkins and his fellow Boy Scouts with Troop 28 in Poplarville made the trek to the local plant observatory to help cover a 900 foot limestone trail with clay and pea gravel. Wilkinson-Jenkins said the aim of the project was to make the Arboretum’s Woodland Trail safer since roots had begun to overtake the walking path, creating tripping hazards.

The project was the last part of his long journey to reach the highest rank in Boy Scouts, Eagle Scout.

And that journey only took him three years.

His passion to learn about the outdoors, knots, the environment, archery and camping is what prompted him to join the Boy Scouts, Wilkinson-Jenkins said.

He chose to complete his Eagle Scout project at the Arboretum due to his previous exposure to the local attraction. Each Thursday he donates some of his time to help staff.

Even though he still has to complete his sophomore, junior and senior years of high school, he knows he wants to attend college to ultimately seek a career with some sort of environmental focus.

Wilkinson-Jenkins said he would like to thank the staff at the Arboretum for all they have taught him and for providing him with a local place to perform his community service hours.