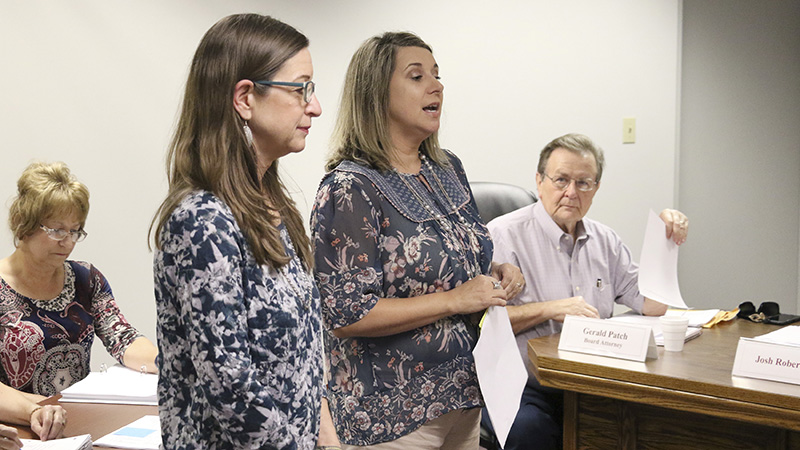 SPECIAL APPOINTMENT: Nicholson Elementary gifted teacher, Maureen Pollitz, was chosen as one of nine teachers from across the nation to collaborate with Samsung to curb turnover amongst STEM teachers. Photo by Jeremy Pittari

A Picayune School District gifted teacher has been selected as one of nine teachers across the United States to work with Samsung to help retain STEM teachers acorss the country.

The announcement was made during Tuesday’s Picayune School District Board of Trustees meeting. Nicholson Elementary Principal Lisa Howie said that Maureen Pollitz, the school’s gifted teacher, is well known by Samsung since her class won the 2015 Solve for Tomorrow contest, which tasked elementary classes to solve a local problem using STEM, which stands for science, technology, engineering and math.

The students devised a robot that is capable of inspecting sewer systems as part of that project.

Recently, Pollitz was asked by the tech company to become part of a nine-person team of teachers selected from across the nation to brainstorm on ways to counteract the high turnover rate seen in the field of STEM teaching, which is especially prevalent in the South, she said.

The appointment is a two-year commitment.

During the brainstorm session the team came up with three ideas, mentorship, collaboration and professional development as potential solutions to the turnover problem. The final method is still to be determined.

Also during Tuesday’s meeting, Board President Frank Ford asked the District’s administration about expenses related to repair District vehicles, including dent repairs to a Ford Transit van and replacement of a hood and front quarter panel on a school bus. Superintendent Dean Shaw said he would have to investigate further and report back at the next meeting with specifics as to why the vehicles were damaged.

The Board also approved a motion to accept the donation of 100 Chromebooks from the Lower Pearl River Valley Foundation.