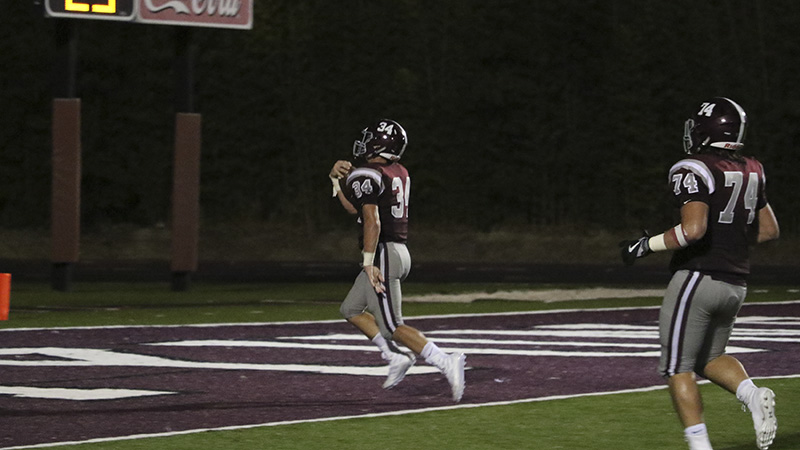 PAY DIRT: Kade Turnage crossed the end zone during Friday’s game against Stone County. The team moves to 5-2 overall and 3-0 in the district. Photo by Jeremy Pittari

The Maroon Tide got off to a rocky start during Friday’s matchup between Stone County’s Tomcats, but ultimately brought home a 36-21 victory.

It started with a back and forth of scoring plays, resulting in a tied score at two points in the game.

Stone took the lead early after taking possession of a Maroon Tide fumble in the first quarter. Four plays later, Tomcats’ quarterback Trey Arrington completed a short pass from the two-yard line to Caleb Armstrong with 6:38 left to play in the quarter. Dawson Cudd’s successful point after touchdown gave the Tomcats a 7-0 lead.

On the next play, the Tide’s own Jortin Raine would tote the ball down field for about 50 yards within range of the end zone but a Tomcats defender stripped the ball from Rain’s possession at about the two yard line, resulting in a touchback and giving the Tomcats possession.

“They stripped us, that was good play on their part and that’s legal. We gotta protect the ball,” Picayune Head Coach Dodd Lee said.

But only moments after the Tomcats took possession of the ball, Arrington’s pass was intercepted by Jairice Travis. Travis capitalized on that interception, carrying the ball for more than 40 yards to pay dirt and Isaac Brice’s successful PAT tied the game at 7-7.

The Tide would take the lead in the second quarter after the Tomcats gave up possession on downs. Eleven plays that covered 70 yards came to fruition when Travis carried the ball from the five-yard line with 9:09 left in the first half.

Stone tried to drive the ball down field through six plays, but had to punt the ball on downs. During the punt, a block by a Tide defender put the ball in Travis’ hands, who drove it to the 12 yard line. Two plays later, Raine would cross the end zone with 6:08 left before halftime. Brice’s PAT brought the Tide’s lead to 21-7.

After the Tomcats gave the ball up on downs, the Tide drove the ball toward the end zone again through 11 plays to bring them to striking distance of a field goal with only seconds left on the clock. But Brice’s 32-yard attempt was unsuccessful.

The Tomcats entered the second half with renewed energy, taking possession of the ball at their 31 yard line and utilized 11 plays to bring it downfield for additional points when Arrington ran the ball from the three yard line with 5:48 on the clock in the third. Cudd’s PAT brought the score to 21-14.

An onside kick by the Tomcats gave them possession again, and allowed the team to capitalize on eight plays for more than 50 yards to tie the game when Arrington completed a pass to Kaleb Giliner with 1:48 left in the third quarter. Cudd’s PAT tied the score at 21-21.

The Tide wouldn’t score again until the fourth quarter when Picayune drove the ball 80 yards from their own 20 through eight plays to allow Jakail Myers to tote the ball across the end zone from the one yard line. With 6:18 left to play in the game, Brice tried twice to add to the score, but two Tomcats penalties eventually forced the Tide to score a two-point conversion via Raine, making the score 29-21.

Kade Turnage would put the final touchdown on the board when he ran from the 23-yard line with 1:43 left to play. Brice’s successful PAT brought the score to 36-21.

Lee said that while his team performed well, more passion will be needed to make it to the post season.

“I don’t think we come out with the intensity to play a football game sometimes. If we would be intense in our alignment and what we do… sometimes we dance around and celebrate, but we’re not intense in what we do,” Lee said. “We got to be intense for 48 minutes if we’re going to be a contender.”

Poplarville cruises to a 62-6 Homecoming win over Forrest…