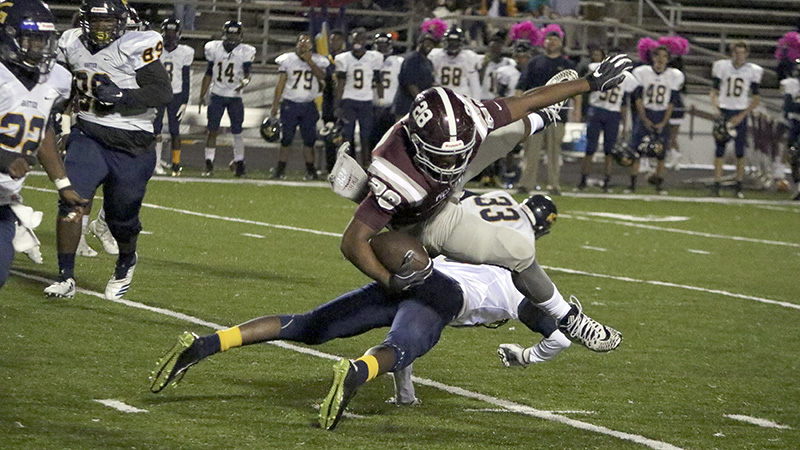 Picayune’s Kaleb Hart is hit by a Gautier defender during Friday’s overtime win in district play. The Tide will travel to Pearl River Central for the last game of the regular season next Friday. Photo by Jeremy Pittari

The Picayune Maroon Tide are one step closer to securing a top playoff spot after an overtime win over Gautier’s Gators Friday night.

For most of the game, it was a close contest that began with the Gators pulling off an early lead.

“I though their kids wanted it awfully bad, but our kids hung in there and did what they had to do to win,” said Maroon Tide Head Coach Dodd Lee.

Even though he felt his team was lagging a bit from last week’s loss to Hattiesburg, he was proud of how they performed Friday against Gautier.

“We did some good things and we won the game, we’ll go back and look at some stuff and see what we can do,” Lee said.

Gautier put points on the board early. Two plays into the game on second and nine, Drake Thornton ran the ball from the Gautier 45 for a touchdown with 11:06 left in the first. Rian Fletcher’s point after touchdown was successful, putting the score at 7-0.

After a turnover on downs, the Gators resumed possession of the ball at the Tide’s 43. From that field position, the team utilized six plays to put the ball on the Tide’s 30, and allow Dylan McDonald to complete a pass to Adrain Scott, and give the Gators a 14-0 lead with Fletcher’s PAT.

The Tide put points on the board on their next possession through six plays and 60 yards when Jortin Raine carried the ball from the one yard line to the end zone. Isaac Brice’s PAT put the score at 14-7 with 5:21 left in the first quarter.

On the ensuing kickoff to the Gators, Kameron Kincaid returned the ball from inside the 15 all the way to pay dirt for another Gator touchdown with 5:09 left in the first.  Fletcher’s PAT brought the Gator’s lead to 21-7.

The Tide worked toward taking the lead by holding onto the ball for a drive that lasted 12 plays. On the final play of that drive, Dylan Schabault ran the ball from the seven yard line to the end zone just before time ran out in the first quarter. Brice’s PAT put the score at 21-14.

An on-side kick attempt gave possession of the ball back to the Tide, who would capitalize on the opportunity through eight plays starting from the Gator’s 49. On the final play of that drive, Jortin Raine carried the ball from the five yard line with 8:40 left to play in the half to tie the score at 21 with Brice’s PAT.

When the Gators had to relinquish possession of the ball on downs, Raine carried the ball from the Gator’s 24 yard line for a touchdown with 6:08 left in the half. Brice’s PAT gave the Tide a 28-21 lead.

After halftime, the Tide took possession of the ball and capitalized on nine plays covering more than 60 yards to allow Raine to carry the ball from the two to score again with 8:08 left in the third quarter. Brice’s PAT put the Tide’s lead at 35-21.

Kincaid returned the ensuring kickoff from inside the 5 yard line for a 96 yard touchdown with 7:53 left in the third quarter. Fletcher’s PAT put the score at 35-28.

With 7:47 left in the final quarter, the Gators would tie the score again through nine plays for more than 50 yards when a pitch from McDonald to Kolby Packnett tied the score at 35-35 with Fletcher’s PAT.

A back and forth game would ensue for the remainder of regulation play, ending in a need for overtime. The Gators went first, but were unable to make a scoring play, even with a fourth and goal at the four line field goal fake play that resulted in a failed pass play.

The Tide however scored a touchdown on third and goal from the one yard line when Jakial Myers used a quarterback sneak to cross the end zone. Brice’s PAT gave the Tide a winning score of 42-35.

The Tide, 7-3 overall and 5-1 in district play, will travel to Pearl River Central for the last regular season game next Friday.