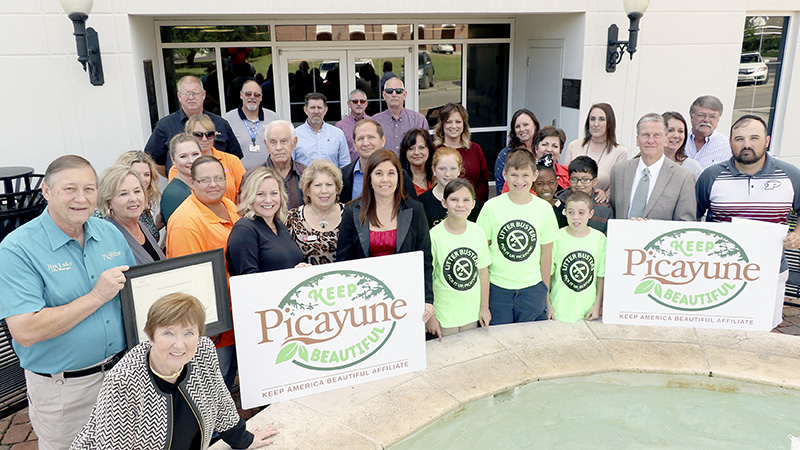 Members of the city of Picayune’s Keep Picayune Beautiful, city employees, community members and students in South Side Elementary’s gifted program attended a ceremony where the city was named as a Keep America Beautiful affiliate. Photo by Jeremy Pittari

To become an affiliate, the city was tasked with reaching several milestones, including establishing the committee, forming a logo and conducting a survey of the city to determine what is working and what needs to be improved.

To help with future efforts by Keep Picayune Beautiful, Keep Mississippi Beautiful will provide the city of Picayune with a trailer that features high railings that enable it to hold a large number of garbage bags.

During the event, South Side Elementary gifted teacher Susan Spiers brought some of her fifth grade students to show off a pamphlet they made. Speirs said the students worked on the informative publication for the past year, starting in fourth grade. Students involved in the project included Warren Brown, Angie Britt, A’Marie Carter, Caden Guillot and Jyllian Moss.

Creation of the pamphlet tasked students with conducting research on the effects of litter and pollution. Information included in the pamphlet includes safety tips for picking up litter, statistics on the negative aspects of litter in a community and a reminder on the punishment for a conviction of littering.

City Manager Jim Luke commended the children for their efforts in creating the pamphlet during Wednesday’s meeting and thanked the city’s committee for their successful work to have Picayune named as an affiliate of Keep America Beautiful.

Moving forward, the committee will be tasked with addressing the findings outlined in the survey, including ensuring grass is cut on public property, dealing with vacant buildings, illegal signs are removed and the exit corridors along Interstate 59 receive landscaping work.

Hill updates Exchange Club of Picayune on One Lake