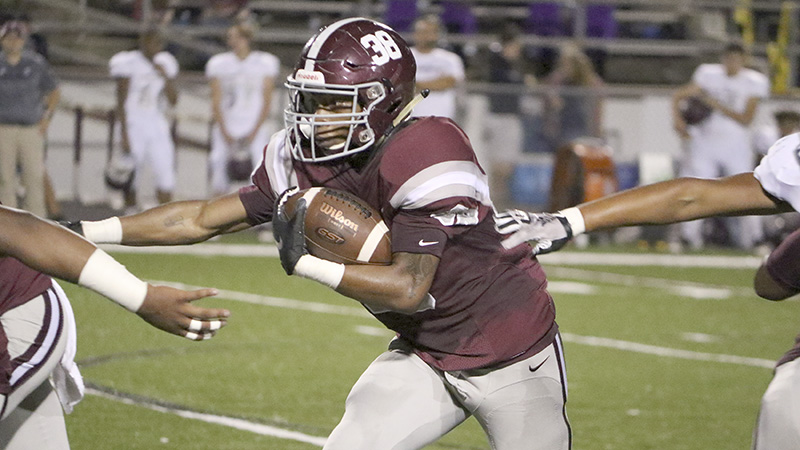 USING BLOCKERS: Picayune’s Jairice Travis follows behind a blocker to push the ball down field during Friday’s win against Long Beach. The team is now 6-2 overall and 4-0 in district play. Photo by Jeremy Pittari

Long Beach’s Bearcats gave a good showing at the opening kickoff of their game against Picayune’ Maroon Tide, bringing it to the end zone and putting points on the board early. But the rest of the game was dominated by the Maroon Tide.

Long Beach’s only score of the game was conducted by D’Lijah Robinson, bringing the team to its only lead of the game with 11:42 on the clock. Kai Vancourt’s successful point after touchdown attempt brought the score to 7-0.

“We didn’t make the opening kickoff tackle… but hey, we can work on that,” Picayune Head Coach Dodd Lee said.

However, the Tide defense would prove too much for the visiting team, keeping them from even getting within reach of the end zone the rest of the game.

Scoring plays by the Tide would follow often and with ferocity the rest of the game.

Five plays after the Tide took ownership of the ball, Kade Turnage would tote the ball from the 15 to allow the team to even the score with Isaac Brice’s successful PAT. With 9:45 on the clock in the first, the score was tied 7-7.

After the Bearcats gave the ball up on downs, the Tide would utilize an eight-play drive for more than 70 yards to allow Jortin Raine to carry the ball from the eight yard line and give the Tide the lead at 13-0 with 3:52 left in the first. Brice’s PAT attempt fell wide.

Early in the second quarter, the Tide would continue their night long effort to widen the lead when through five plays setting the team up at the one yard line. Jakail Myers would cross the end zone with 9:53 left before halftime. Brice’s successful PAT brought the score to 20-7.

A fumble by the Bearcats on their next possession on the third play would give the Tide a chance to capitalize on a long drive from the team’s 14-yard line to the Bearcat’s seven-yard line through six plays, allowing Turnage to cross the end zone for the second time with 6:05 left in the second. Brice’s PAT brought the score to 27-7.

After the Bearcats failed to earn a first down on their next possession, the Tide took over at the their own 40-yard line, used five plays to get the ball in striking distance and set Gregory Swann up to tote the ball from the six yard line for another Maroon Tide touchdown. With Brice’s successful PAT attempt, the score was now 34-7 with 2:08 left before halftime.

After coming back from halftime, the ball would change hands four times before the Tide would take over again and score on a four play drive to the end zone. The drive culminated in another Turnage touchdown, this time from the eight-yard line with 6:02 left in the third. Brice’s PAT brought the score to 43-7.

Again, the Bearcats could not find enough yardage for a first down in their next possession, giving the ball up to the Tide, who drove the ball from the Bearcat’s 29-yard line through six plays to the four-yard line.

On the next play, Jairice Travis crossed the end zone from the four-yard line with 11:53 left to play in the final quarter. Brice’s PAT gave the Tide a 50-7 lead.

The last scoring play of the game came after the Bearcats again could not get enough yardage for a first down, giving the ball back to the Tide at the Bearcat 38-yard line.

Six plays later, Issac Hickman carried the ball from the two-yard line to put the final touchdown on the board. With Brice’s successful PAT, the final score was 57-7 with 5:23 left to play.

Lee said there are some things he wants to work on before the team hits the road next week to take on Hattiesburg.

“We’re just going to have to go over there and play with our hair on fire. I think our kids will play.”