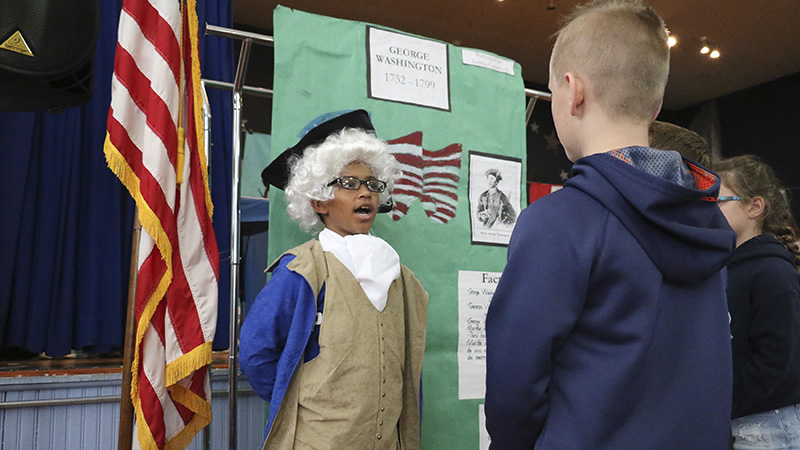 PERFORMANCE: A student dressed as George Washington recites facts he learned about the father of the United States of America as part of his research to help put on a living wax museum at Pearl River Central Elementary. Photo by Jeremy Pittari

Students in the Pearl River Central Elementary QUEST program organized and held a living wax museum that tasked them with first picking and then researching a person who interests them.

Thursday morning, the students culminated the project by dressing in costumes indicative of their person of interest gathered at the campus’ auditorium and lined the walls next to backdrops they made themselves so parents and students could tour the museum.

Third grade gifted teacher Judy Cuccio said children in the QUEST program attend the gifted class once a week and during that day, they spent an hour or two over a five-week span researching their chosen current or historic notable personality, creating the backdrop and rehearsing their minute long speech.

Some children choose notable historic people, such as Albert Einstein or George Washington, while others choose people from the present such as famous basketball players.

Not only did the graded project teach the students research skills, Cuccio said it also built on each student’s ability to write, create art, speak publicly and read.

During the event, students on campus walked through the living wax museum and stopped at each station where a “button” was placed on the display. Once a student pushed the “button” the QUEST student recited a one to two minute presentation about their notable person before returning to their “wax” pose.

Later in the day, parents had the opportunity to tour the museum.