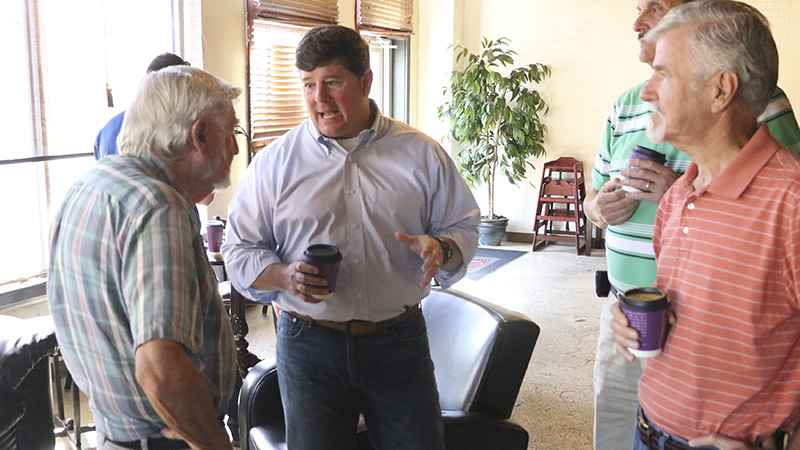 POLITICKING: Congressman Steven Palazzo stopped into Picayune to meet with community members while on the campaign trail. Photo by Jeremy Pittari

Congressman Steven Palazzo, the incumbent running for his seat in the U.S. House of Representatives, 4th Congressional District, stopped into Picayune Tuesday morning while on the campaign trail a week before the general election.

His aim is to get people to head to the polls to vote Republican and stop what he called a potential flip of power within the House of Representatives.  Such a change of power, according to Palazzo, would end all of the progress made in the past couple of years, such as payroll tax cuts and growth in the job market.

“If the House turns then they’re immediately going to begin investigating and going after Judge (Brett) Cavanaugh and President (Donald) Trump,” Palazzo said.

“Although things are doing really good right here right now in South Mississippi, the election on Tuesday could erase all the gains we’ve had for the past two years overnight,” Palazzo said.

Some of the biggest topics for Palazzo as he heads into this election are the current unemployment rate, solid economy and the current tax cuts. If the House can keep a Republican majority, Palazzo said he feels legislation can be passed that would ensure those temporary cuts become permanent.

Recently, legislation was taken up in the House to make the payroll tax cuts permanent, and while it passed the House, no action was taken on the bill by the Senate.

Another topic of interest to him is to increase the number of enlisted men and women, boost their morale and ensure they have the tools they need to be effective.

As for the wall proposed by President Donald Trump in his campaign, and the current caravan of refugees heading through Mexico to the U.S. border, Palazzo said that while refugees built this nation, immigrants need to come into this country legally and not become a burden but rather contribute through science, technology, engineering, math or vocationally, Palazzo said.

As for the wall, he said that estimates to build the wall Trump proposed could total $24 billion. With the chance of the current request for $5 billion passing the Senate being “slim to none,” Palazzo suggests starting a program similar to war bonds that were issued during WWII to pay for construction of the wall over several decades.

“People just giggle when we say ‘wall.’ That wall is not just brick and mortar…, it’s boots on the ground, it’s technology,” Palazzo said.

His focus for the state is continued workforce development to make Mississippi a viable place for companies to locate, since the area already has Stennis Space Center and Ingalls. All those companies would need is a reason to stop and see what areas like Pearl River County and Hancock County have to offer, which could double and triple the number of jobs in south Mississippi, he said.

In the realm of education, Palazzo said that more funding is not the only approach. He suggested finding ways to cut back on wasteful spending and provide bonuses to high performing teachers as an incentive.

“I know I’m personally tired of saying Mississippi is 50 or 49 in education, but you got this group out there saying ‘just give us more money and we’ll fix it.’ I don’t think any amount of money will fix it, but…. being bold, being courageous may be the solution to how we improve our educational system here in Mississippi. Money’s good, but money’s not going to get us to 30 or 25 or 15,” Palazzo said.

He would like to see a system that rewards successful teachers and replaces ineffective teachers.

“I do think we should reward our high performing teachers,” Palazzo said.

To find funding for those merits, reduction in the duplication of services could be implemented, he said.