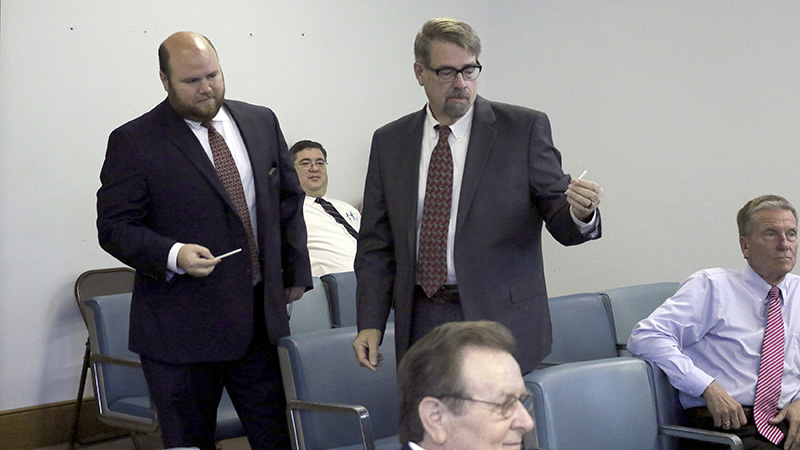 AT RANDOM: Attorneys Bill Cruse, left, and Michael Patten look at the straws they picked to determine who will fill the vacant position of county prosecutor left by Aaron Russell Jr., center, who recently retired from the position. Photo by jeremy Pittari

With the retirement of the county prosecuting attorney, members of the Pearl River County Board of Supervisors were tasked with appointing a person to that position until an election can be held next year. The decision ultimately came down to a draw of straws, mimicking the method used to determine the winner of a municipal election held less than five years prior.

Four local attorneys expressed interest in filling that position until the election is held in November of 2019.

Each candidate had a few minutes to tell the Board a little about themselves before a decision was made.

Patch went first, saying that he’s been the city prosecutor in Picayune since 2004, and intended to run for county prosecutor in the upcoming election. His plan is to retire his law firm by December of this year, which would free up time to continue as the attorney for the Picayune School District, Coast Electric and as Picayune’s city prosecutor.

Gray said he too intends to run for county prosecutor in next year’s election, and said that the outgoing county prosecutor, Aaron Russell Jr., surprised everyone by announcing his early retirement. Gray said he would serve the county to the best of his ability and if appointed would reduce the workload at his private practice to compensate.

Cruse also expressed his interest to be a potential candidate in the upcoming election, and said that regardless of the outcome of the Board’s decision Monday morning, he would still run for that position. He said that while he did not have the level of experience as Patch, he felt he could get the job done and noted his intention to work with law enforcement officials to ensure their needs are met and any training they may need would be available.

Patten said he’s a lifelong resident of Poplaville who has a passion for the community. He spoke about his experience dealing with mental health cases, his past work with drug and alcohol cases and added that he has acted as both a prosecutor and defender in cases. Patten said he has also worked with the youth court.

After hearing from the attorneys, the Board went into a short executive session to discuss the personnel matter. When they came back into session, the Board chose to use the same process used by the Poplarville Board of Aldermen back in the 2014 election that involved two candidates receiving an equal amount of votes; the drawing of straws.

Four straws were placed in a hat, and each person who expressed interest chose a straw. The person who chose the shortest straw would fill the vacancy until the election.

After all straws were drawn, Patten was declared the winner and will fill the position until the election is held next year. The winner of that election will serve as county prosecutor starting in Jan. 2020.

Graduation rate up in PRC’s District